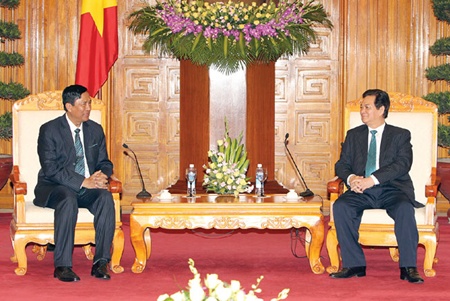 PM Dung highlighted positive developments in economics, trade and investment co-operation, suggesting that the two sides further boost collaboration in 12 areas agreed upon by their high-ranking leaders including seafood, oil and gas, telecommunication, aviation and energy.

Congratulating Myanmar on its successful hosting of the 24th ASEAN Summit on May 10-11, PM Dung said he met with Myanmar President U Thein Sein on the sidelines of the event to discuss ways to boost economic, trade and investment co-operation between the two countries.The two sides agreed to work with other ASEAN members to promote solidarity within the bloc and building the ASEAN Community by 2015.

They also raised a common voice on international and regional issues, including the ongoing tensions in the East Sea, he added.

For his part, Minister Myint said his visit aimed to foster bilateral trade connections in the fields of chemicals, fertilisers, steel and agricultural machinery.He affirmed that his government would create favourable conditions for Vietnamese firms to do business in Myanmar.

Sharing Viet Nam’s concern over China’s placement of a drilling rig in Viet Nam’s continental shelf and exclusive economic zone, the minister stressed that Myanmar’s consistent policy was that the parties concerned should abide by international law, especially the 1982 UN Convention on the Law of the Sea UNCLOS and the Declaration on the Conduct of Parties in the East Sea  DOC. — VNS

via Viet Nam encourages businesses to make investments in Myanmar