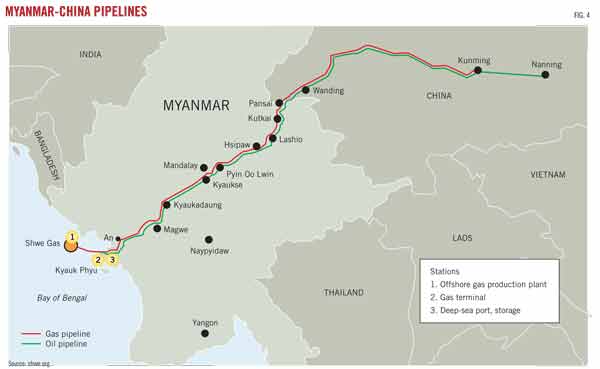 The development of a special economic zone (SEZ) around Kyaukphyu in Myanmar’s Rakhine State could move closer to reality before the end of the year with the naming of tender winners for the development of factories, new housing and infrastructure.

Twelve foreign and domestic firms have been shortlisted by the SEZ development committee, which failed to name any of them in a supposedly open process, but which sources said include Chinese, Singaporean and Indian businesses.

China continues to be seen as pivotal to the successful development of the Kyaukphyu SEZ, despite cooling business relations between Naypyitaw and Beijing.

First, President U Thein Sein’s suspension of the massive Myitsone dam on the Ayeyarwady River upset China and, more recently, negotiations have broken down over the construction of a railway line from Kunming in southwest China’s Yunnan Province across Myanmar to Kyaukphyu.

China and Singapore were the target of recent roadshows seeking to attract investment in the Kyaukphyu SEZ. The promotion included a six-minute video extolling the virtues of Kyaukphyu, currently an undeveloped backwater where promises by China National Petroleum Corporation (CNPC) to provide 24-hour electricity supply to the local population remain unfulfilled, said the Rakhine Social Network Information Center, a local NGO.

CNPC has built crude oil and gas pipelines running from Kyaukphyu through Magway Region, Mandalay Region and Shan State to China, as well as an oil transhipment terminal for tankers docking with oil from Middle East and African suppliers.

Arakan Oil Watch, an NGO which monitors developments around Ramree Island where the terminal is sited, believes Kyaukphyu could become a base for a marine services sub-industry to provide engineering, supplies and maintenance support for the numerous offshore oil and gas exploration blocks recently awarded to a clutch of international companies.

The SEZ promotional video said that the Kyaukphyu SEZ will provide an important Indian Ocean link for China, northeast India and some countries of the Association of Southeast Asian Nations (ASEAN).

“Kyaukphyu is uniquely positioned to serve as a trade corridor connecting these three economies with a combined population of 3 billion people,” the video said. “It will play a vital role in unlocking the potential of the [Myanmar] hinterland.”

A Chinese state-owned firm heads a partnership appointed in March to promote, advise and coordinate the Kyaukphyu SEZ. Naypyitaw named a group led by CPG Corporation of Singapore, however, this firm was bought in 2012 by China Architecture Design and Research Group, China’s largest state-owned engineering design and services company.

A key element of the BCIM Corridor, for Bangladesh-China-India-Myanmar

Kyaukphyu is seen by China’s strategic planners as a key element of the so-called BCIM Corridor, for Bangladesh-China-India-Myanmar. The BCIM is a pet project of Beijing’s and was promoted by China’s President Xi Jinping on a state visit to India in September.

A pivotal place in the BCIM corridor would be Mandalay, linking Kunming in Yunnan Province with northeast India and on into Bangladesh. But observers also see the BCIM idea as instrumental in facilitating Chinese access to the Indian Ocean.

This is an excerpt of a story first appeared in the November 2014 print issue of The Irrawaddy magazine.