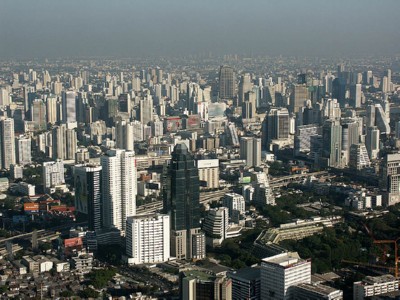 The Bangkok condominium market has drawn strong interest lately from overseas investors especially from Asia, says a recent report from Bangkok-based real estate agency Plus Property. According to the company’s assistant managing director Anukul Rathpitaksanti, enquiries from foreign buyers, mainly from Hong Kong and Singapore, have risen more than 15 per cent in the past two months and could account for 20 per cent of new condo sales this quarter. “Sales of new and second-hand condominiums through our company have topped THB50 million (US$1.67 million) so far.

“Sales of new and second-hand condominiums through our company have topped THB50 million (US$1.67 million) so far. Most of the Hong Kong and Singapore buyers, who are targeting Bangkok, believe that their home markets are overheated. They’re also worried about the moves their respective governments take to curb rising property prices,” Anukul said.

Meanwhile the Singapore government has made it compulsory for developers to charge progress payments for any condominium units being sold during the construction process or new launch projects selling off plan.

Anukul added that Hong Kong and Singapore buyers prefer buying in Bangkok as, with the same amount of money, they are restricted to the very bottom end of their home markets while they can get into top end condos in the most sort after locations in Bangkok.

In terms of overall prospects of the regional market, Anukul opined that the issue of low interest rates is just part of what is fueling regional market.

“Currently, the Asian region is awash with cash by comparison to the rest of the world. Bangkok condominiums are also seen as a low risk cash generating option, particularly when they can be bought for as little of one third of Hong Kong prices. Although there are predictions of rising interest rates, the issue is not a big concern for Hong Kong and Singapore buyers as they tend to pay in cash and those who do borrow seem to be well aware of a 50 per cent hike in interest rates over the next two years,” Anukul concluded.

This is a critical time for Thailand, with the country recovering from the recent political events of April and May and preparing for elections next year. We have made it through a sad and painful period for Thailand, and today, I’d like to share my thoughts on what we can learn from the events of the past few months, and how I feel that the public and private sectors, the diplomatic community and the media, should work together to position Thailand to bounce back once again and prove its resilience.
The perception of Thailand in the eyes of the world impacts all aspects of the Kingdom, from the jobs and incomes generated by the tourism industry, to the level of foreign direct investment, to the number of businessmen who travel to Thailand to do business with Thai companies and drive the growth of the economy.

Related Topics:property Thailand
Up Next

Emirates launches A380 flight on Bangkok to Hong Kong