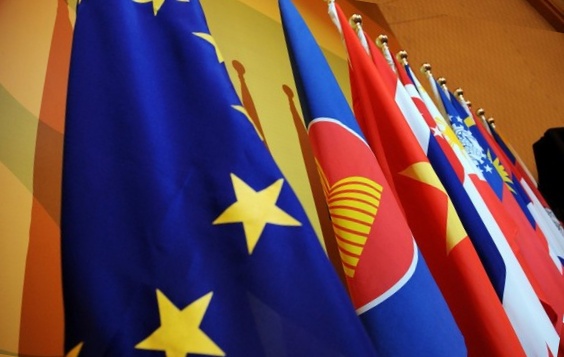 Last week the EU announced that it was on the verge of concluding its free trade agreement with Singapore. I’ll have some comments on the EU-Singapore FTA when the final text comes out.

This agreement is important because it will be the first FTA concluded by the EU with an ASEAN country, following up on the EU’s process of negotiating FTAs on a country by country basis rather than with ASEAN as a whole.

For ASEAN’s other trading partners, the EU-Singapore FTA is a reminder that ASEAN has a broad scope in its trade policy, looking beyond its immediate region.

The EU’s attempt to negotiate an EU-ASEAN FTA stalled several years ago due to the political difficulties of negotiating an FTA that included Myanmar, and with institutional issues in ASEAN (the EU thought that it could negotiate directly with ASEAN, but the ASEAN FTAs are actually a collection of 10 bilateral FTAs with the trading partner, with the 10 ASEAN members negotiating on a collective basis).

There are several reasons often cited for this delay, but the one most cited was the lack of an EU-Singapore tax cooperation agreement.

Several EU members have long been concerned about its citizens using Singapore as a tax haven. Last month’s financial information cooperation agreement between Germany and Singapore thus eliminated this major hurdle, clearing the way for formal acceptance of the EU-Singapore FTA later this year.

The EU is now in FTA talks or preparatory FTA talks with several ASEAN members including Malaysia, Indonesia and Vietnam. The EU-Singapore FTA will thus provide a basic template for those EU FTAs, although perhaps not an exact duplicate, due to agriculture being a less sensitive issue for trade between the EU and Singapore.

For the talks involving the other ASEAN members, raw agricultural products exported from ASEAN will be an issue for the EU, and processed agricultural products exported from the EU to ASEAN (e.g., those subsidized by the EU’s Common Agricultural Program will be an issue for ASEAN). Nevertheless, the major points of the EU-Singapore FTA, particularly with regard to services and investment, will be closely studied by the other ASEAN members.

For ASEAN’s other trading partners, the EU-Singapore FTA is a reminder that ASEAN has a broad scope in its trade policy, looking beyond its immediate region.

Although the US has had an FTA with Singapore for more than ten years now, it does not have an FTA with any other ASEAN members.

If and when the EU concludes its FTA talks with Malaysia or other ASEAN members, it will represent a competitive advantage for the EU vis-à-vis the US (one which it already has in Myanmar, as the US maintains many of its Burma sanctions). That, combined with the impending start of ASEAN’s Regional Economic Cooperation talks with its trading partners, indicates that perhaps the United States needs to augment its trade policy in the region beyond the Trans Pacific Partnership talks.

Note: This article was published on behalf of  AEC Blog, the views and opinions expressed in this article are those of the authors and do not necessarily state or reflect the views of  Thailand Business News

Property in Thailand: What do you really own ?