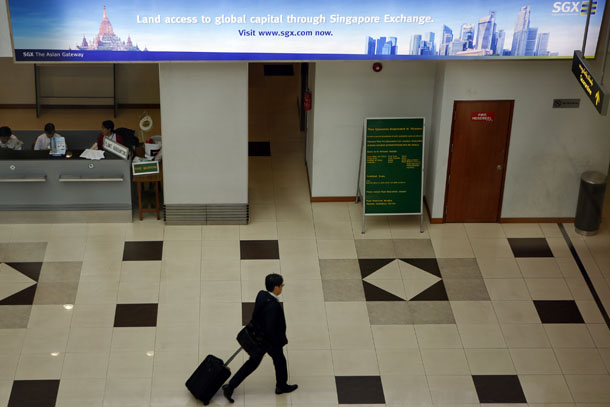 The advertisements underscore Singapore’s nascent role as a magnet for Burma companies eager to grow as their country emerges from decades of isolation but frustrated by its crippled banking system and barely existing financial markets.

Lawyers and financial advisors who work closely with Burma firms say about six to 10 companies are considering a listing in Singapore over the next couple of years.

“Many Myanmar [Burma] business owners admire the reputation of Singapore Inc and look forward to raising their own prestige that comes with a Singapore listing,” said Kim Huat Chia, head of corporate & capital markets at Singapore law firm Rajah & Tann.

But hurdles to successful offerings are high.

Singapore’s bourse says while it has seen interest from Burma companies, they will have to meet its corporate governance standards. For many businesses, that’s still quite a distant goal, lawyers and bankers said.

That’s further complicated by several Burma tycoons being on a US sanctions list, accused of making their fortunes by colluding with the former military junta, which was notorious for corruption and human rights abuses. While the European Union ended sanctions this year, the United States has only suspended them.

The potential for resistance from Burma’s government, which is planning its own stock exchange, has also made some local businesses wary about tapping capital markets offshore

To date, only one Burma firm has managed to list in Singapore—Yoma Strategic Holdings Ltd, which listed in 2006 through a reverse takeover.

The property and car sales conglomerate led by tycoon Serge Pun now counts Capital Group, Aberdeen Asset Management and Vanguard among its top 10 shareholders and has seen its share price quadruple since early 2012 on investor interest in the hot frontier economy.

It’s only natural that other Burma firms would want to follow suit.

“To this day in Myanmar, there’s no stock market, no bond market, no banking market to talk about. There are quite a few companies that are asset-rich but have no source of liquidity,” said Andrew Rickards, chief executive of Yoma.

“If it was smart to do an RTO [reverse takeover] in 2006 for Yoma, it’s absolutely necessary now for companies to have access to international markets.”

But if corporate Burma is drawn by Yoma’s example, it is also wary of what happened to Zaw Zaw, one of Burma’s most powerful businessmen.

It said it was “unable to proceed with the review of the application as major issues have not been adequately resolved.” Among these concerns, it cited Zaw Zaw’s placement on the US sanctions list and the lack of clarity as to why he was on it. Zaw Zaw could not be reached for comment.

Burma’s corporate landscape is dominated by about 20 large conglomerates, with the biggest ones estimated to employ as many as 30,000 people each.

The country does have an over-the-counter bourse, the Myanmar Securities Exchange Center (MSEC), but it has only two listed firms. When the stocks are traded, which is very rarely, payments are normally made in cash.

A few companies have gone public, but not on the MSEC. Instead they sell shares from their offices or even in public places, letting people know by taking a newspaper advertisement or just through word of mouth, Aung Thura said.

While Burma’s government is working to establish a stock exchange by 2015 with the help of Japan’s Daiwa Securities Group, many in Burma business circles worry that the deadline may be pushed back. Still, going offshore may risk incurring the displeasure of the government.

Myanmar economy to grow at 6.8% next year – World Bank