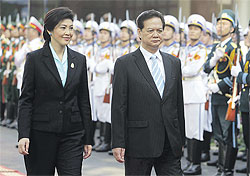 Both sides agreed to aim for trade worth US$18 billion (560 billion baht) in 2015, Mr Dung said at a joint cabinet meeting with his Thai counterpart Yingluck Shinawatra.

The announcement followed the second joint cabinet meeting between the two countries since 2004. An agreement to resume the meetings was reached when Ms Yingluck visited Vietnam in November last year.

Speaking at yesterday’s meeting, Ms Yingluck said cooperation in the fields of politics, economics and culture between the two countries will be strengthened ahead of the implementation of the Asean Economic Community in 2015.

Vietnam and Thailand agreed Saturday to raise their relationship to strategic partnership. The agreement was reached by Vietnamese Prime Minister Nguyen Tan Dung and his Thai counterpart Yingluck Shinawatra at the second Vietnam-Thailand Joint Cabinet Retreat in Vietnam’s capital Hanoi.

The two PMs agreed to accelerate the signing of an agreement on labor cooperation, step up investment cooperation and connectivity in the East-West Economic Corridor, strengthen cooperation in rice exports and in culture, education and training.

Both countries reaffirmed that they will not allow any hostile individuals and forces to conduct activities in their own country against the other country, while promoting cooperation in the fight against transnational crimes and terrorism, in both bilateral and multilateral frameworks.

The two sides also discussed their cooperation in regional and international frameworks, especially the building of ASEAN Community by 2015, as well as some regional issues of mutual concern.

Vietnam also believed that Thailand as the ASEAN-China coordinator will contribute actively to promoting strategic partnership between ASEAN and China for peace, stability and development in the region.