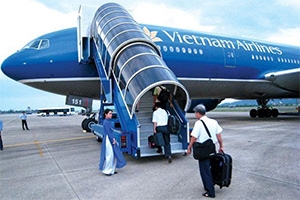 Vietnam Airlines has completed preparations for the official launch of a direct service between Cam Ranh International Airport in the central coastal Khanh Hoa province and Moscow .

According to Luong Van Thanh, Director of the Cam Ranh International Airport , this is the first direct international route to Cam Ranh since the airport was upgraded to international level four years ago.The route will be launched on April 5.

Vietnam Airlines plans to operate one flight every Friday, using Boeing 777s.Charter flights from Russia ’s Far East to Cam Ranh airport have continuously increased over the past three years, with an average 7-8 flights per week in winter and 1-2 during other seasons of the year, Thanh said.

Realising that the green growth in a sustainable, environment friendly way is the urgent need for all economic sectors, local authorities have been determined to develop green tourism.

Thua Thien-Hue province – the land of the ancient capital of Hue – has developed some “green destinations,” such as the Phuoc Tich ancient village, Thanh Tien confetti village and Tam Giang lagoon which have become well known to tourists.

The visitors to the Phuoc Tich ancient village have to leave their cars or motorbikes outside the village and walk into the village. Those, who want to discover Tam Giang lagoon, are required to ride bicycles and plant a green tree.

The provincial authorities are also drawing up a plan on improving Ngu Ha River and the lakes; relocate residents in some areas in order to develop a sustainable tourism environment.

Hanoi has also thought of developing green tourism. The travelers to the capital city can go sightseeing in the ancient street area on streetcars, or ride bicycle to the ancient village of Duong Lam to learn about the culinary culture and traditional habits and customs. Travel firms are going to offer a series of green tourism products including homestay, eco-tourism, and spiritual tourism.

“The green tourism projects, once becoming operational, would bring dual benefits to Hanoi,” said Truong Minh Tien, Deputy Director of the Hanoi Department for Culture, Sports and Tourism. “This would help Hanoi develop the local economy in a sustainable way and create a beautiful image of Hanoi in the eyes of travelers.”

The tourism development strategy by 2020 with the vision until 2030 clearly stipulates that Vietnam would prioritise to develop the types of tourism associating with sea, islands, while emphasising the original cultural and ecological features in the tourism products. As such, developing green sea tourism has been laid down as a priority task which aims to improve the competitiveness of Vietnam’s sea tourism.

However, local authorities, though foreseeing the inevitability of the green tourism and the high efficiency of the model, understand that it would still take them a lot of time to apply the model in a large scale.