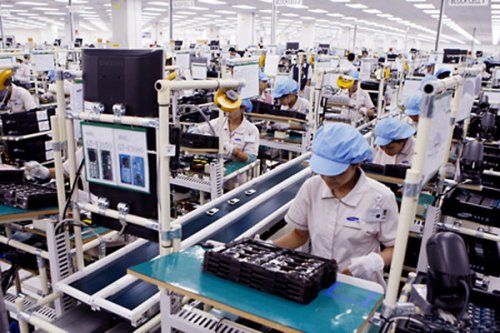 With increasing foreign direct investment (FDI) flows into its manufacturing sector, Vietnam stands a great chance of leaping ahead and replace China as the new production center.

Speaking at a conference recently organized by the State Bank of Vietnam in collaboration with the World Bank, Victoria Kwakwa, the World Bank’s Country Director for Vietnam, said FDI flows into Vietnam’s manufacturing sector has rapidly increased over the past 10 years and will possibly rise more.

Although the FDI proportion of Vietnam’s manufacturing sector was small compared to those of countries such as China, Indonesia and Thailand, the Vietnamese sector has more potential, Kwakwa said.

Vietnam has a good location and boasts a source of labor which is plentiful and cheap, she said, adding that the country is also benefiting from a range of free trade agreements.

Tran Bac Ha, chairman of the Bank for Investment and Development of Vietnam (BIDV), saw Vietnam’s opportunity coming from international producers’ recent shifts to Southeast Asian countries from China, which is losing its appeal with slowing economic growth and surging labor costs.

South Korean investment into China dropped by 32.1 percent in the first half of the year, Ha said, quoting Korean finance ministry’s figures. Last year, only 700 South Korean businesses were established in China, compared to 2,300 in 2006.

Rinding the new FDI wave that comes with TPP in Vietnam

Private and foreign investors to be allowed in Vietnam’s airports

END_OF_DOCUMENT_TOKEN_TO_BE_REPLACED

Vietnam is projected to be the fastest-growing internet economy in Southeast Asia in the next 10 years according to the e-Conomy SEA 2021 report by Google, Temasek, and Bain, Southeast Asia’s Internet economy research program. It also predicts that by 2025, the country’s overall internet economy will likely reach US$57 billion in value with a compound annual growth rate (CAGR) of 29 percent.