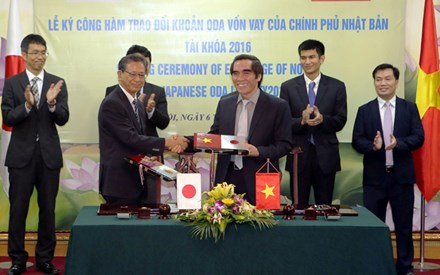 Japan has pledged ODA loans worth 11 billion yen (US$106 million) to Vietnam to fund its socio-economic development.
An agreement to the effect was signed Tuesday by Deputy Minister of Planning and Investment Nguyen Van Trung and Japan’s ambassador to Vietnam, Hiroshi Fukada.
Trung said the loan would be used to implement programs to support economic management and improve the country’s competitive advantages that under a five-year socio-economic development plan.
“Vietnam is committed to using the ODA loan properly for [agreed] purposes and with the highest effectiveness.”
Japan has provided official development assistance worth 2.8 trillion yen (US$27.6 billion) since 1992, according to the Ministry of Planning and Investment.

The money will fund a five-year

Vietnam GDP may contract 0.6 percent annually due to disasters, pollution