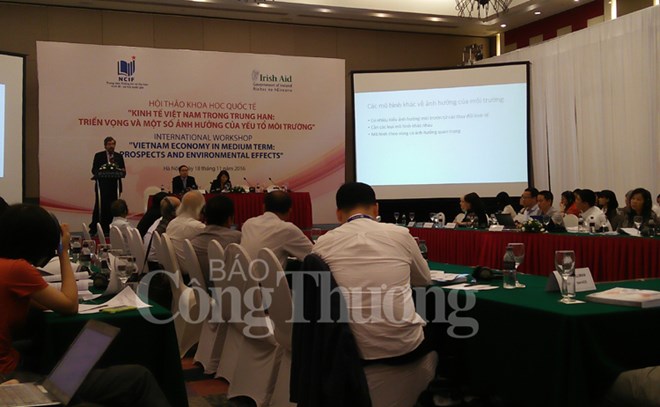 Vietnam’s gross domestic product (GDP) may shrink by about 0.6 percent per year between 2016 and 2020 due to natural disasters and environmental pollution, an official has warned at an international symposium in Hanoi on November 18.

The event was held by the National Centre for Socio-economic Information and Forecast under the Ministry of Planning and Investment. It was a forum for domestic and foreign scientists and officials to look into the prospects of and environmental impacts on Vietnam’s economy in the mid-term.

Dang Duc Anh, head of the analysis and forecast board at the ministry, said climate change and environmental pollution affect all regions and aspects. Among them, water resources, agriculture and rural development, health care and coastal areas are the most susceptible.

Vietnam ranks 23rd among 193 countries in the Climate Change Vulnerability Index released by Maplecroft, a global risk and strategic consulting firm based in the UK. It is one of the 30 countries rated as “extreme risk” in the list.

Although Vietnam has not caused serious impacts on the global warming, it is among the 25 low and middle-income countries that release most greenhouse gases every year.

Increasingly popular environmental pollution, as an unexpected adverse effect of economic growth, has severely influenced Vietnam’s development in the mid and long terms. Particularly, water, air and land pollution in cities, big residential areas and craft villages has been on the rise, participants noted.

Dang Duc Anh said Vietnam needs appropriate policies to adapt to and mitigate climate change impacts and protect the environment so as to ensure sustainable development. Industries that rely on the exploitation of natural resources, especially non-renewable ones, or have low economic benefits should also be curbed.

Meanwhile, Dang Kim Khoi, Director of the Centre for Agriculture Policy at the Ministry of Agriculture and Rural Development, asked for effective channels to popularise early warning information, and those information must be detailed and understandable to all people. When a natural disaster happens, direct and technical assistance from the Government is also necessary for encouraging people to respond to that incident.-VNA