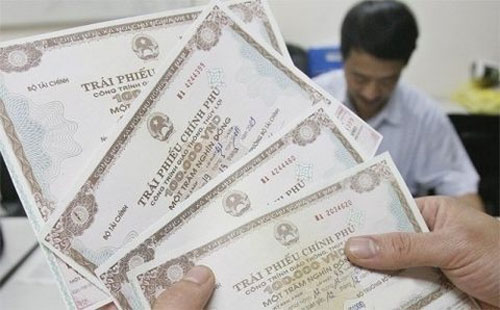 VietNamNet Bridge – Capital mobilization through Government bond sales beat the target by 11% and set a record in terms of volume last year.

By the end of December, the State Treasury had raised more than VND281.7 trillion from G-bond issues for the State budget, while the plan for the year was only VND250 trillion.

That is why the primary G-bond market was relatively quiet in the final weeks of December. There were times when the State Treasury temporarily stopped bond auctions.

All credit institutions accomplished their business objectives for 2016, so they felt little pressure to take profits, impacting on supply and demand on the primary and secondary bond markets.

The liquidity of the G-bond market in the final month of 2016 was negligible. Apart from the exchange rate rising to new highs, this is attributed to the fact that investors are looking for directional cues from interest rates in 2017.

Inaction seems to be pervasive on the primary G-bond market in the final sessions of the year.

On December 29, Vietnam Development Bank invited bids for some VND1.5 trillion worth of five-year and 10-year G-bonds. The auction attracted only three participants with VND1.54 trillion worth of bids, and none of them won.

A day earlier, the State Treasury raised VND456 billion from VND4 trillion worth of bonds put up for tender.

Five-year bonds lured 15 participants with VND5.6 trillion worth of bids, but none of them won. The winning coupon remained unchanged at 7.2% and 7.98%.

On the secondary market, the yields for three and seven-year tenors went up, whereas the remaining maturities had the same rates as in the previous week.

Banks said caution dominated the market in the context of exchange rate volatility, less liquidity in the banking system at the end of the year and expectations for a new trend to form in the new year.

Before the Christmas and New Year holidays, the trading volume of foreign investors, as in previous years, stayed low.

One week earlier, from December 19 to 23, the trading volume of G-bonds on the secondary market rose slightly, from VND3.8 trillion to VND4 trillion. The five-year tenor attracted the most transactions.

Foreign investors net sold VND354 billion of bonds last week. However, in all of 2016, they net bought over VND12.1…

Asean Briefing : Fish Deaths in Vietnam, and Duterte’s Economic Plan for the Philippines