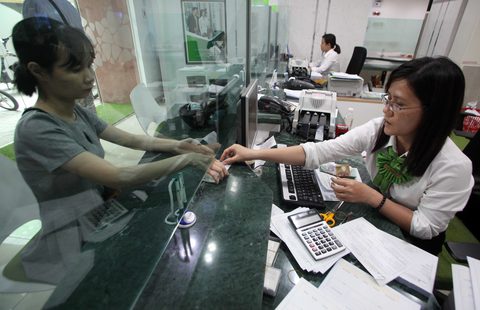 The Joint Stock Commercial Bank for Foreign Trade of Vietnam (VCB) and the Asia Commercial Joint Stock Bank (ACB) issued a total of $452 million worth of bonds in 2016.

Customer and VCB employee during a transaction at VCB office in Ha Noi. Together with ACB, the bank had issued a total of more than $451 million bond worth in 2016 to public investors.

VCB issued public bonds worth VND2 trillion in 2016 with a 10-year maturity date and a total yield consisting of the benchmark yield plus a 1 per cent annual rate. The bank issued bonds from October 26 to November 25, 2016. The State Bank of Viet Nam had given VCB the nod to issue bonds using domestic currency at a face value of $360 million.

ACB issued VND1.05 trillion worth of bonds from November to December 2016. Its initial plan was to issue bonds worth VND1.5 trillion to add to its second-rate capital and ultimately increase its mid- and long-term capital rates.

While ACB did not achieve its goal, it has successfully mobilised a long-term source of capital of up to 10 years. In the first five years, ACB will give an interest rate equal to the benchmark rate plus 2 per cent per annum, which will increase to 2.5 per cent in the next five years.

VCB’s report at the year-end business conference for 2016 and its 2017 implementation plans show that the bank has issued VND8 trillion worth of bonds to the public and other financial institutions, including VND6 trillion worth of additional premium bonds.

On June 30, 2016, ACB had reported having mobilised VND1 trillion worth of bonds with a five-year maturity period. It initially registered a public offering but its bonds were offered to only 34 investors, seven of whom bought 85.75 per cent of the total issued bonds. The yield for the first period will be 8.5 per cent per annum, with a floating rate equal to the benchmark rate plus 2 per cent for the following period.

In 2016, issuing shares to attract capital did not prove to be a great success for commercial banks in Viet Nam, but the capital flow was strong owing to bonds issuance.