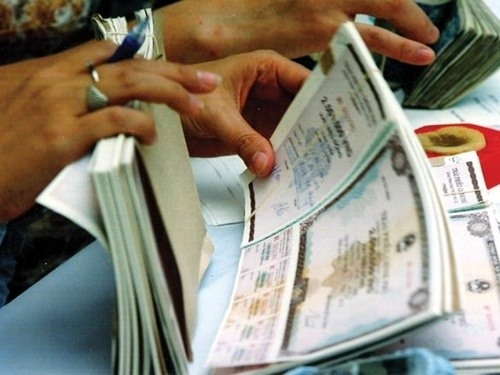 The Bank for Social Policies has mobilised VND4.2 trillion (US$184 million), so far, this year by auctioning Government-guaranteed bonds at the Ha Noi Stock Exchange (HNX).

The bidding for the five-year bonds fetched VND300 billion at a winning coupon rate of 5.4 per cent per annum, up 0.1 per cent from last week’s session. The bidding attracted two HNX members with valid bidding volume of VND400 billion and annual coupon rate ranging from 5.3 per cent to 5.5 per cent.

Meanwhile, VND280 billion worth of 15-year bonds were mobilised at a winning coupon rate of 7.35 per cent per annum. The bidding session attracted two participants with valid bidding volume totalling VND380 billion and annual coupon rate ranging from 7.3 per cent to 7.35 per cent.

Vingroup sees rise in earnings for 2016

Property and retail giant Vingroup saw sharp increases in its earnings for 2016, according to the company’s post-audit combined financial report.

Vingroup said in its financial statement yesterday that combined net revenue rose nearly 70 per cent year on year to VND57.6 trillion (US$2.52 billion) for 2016, and post-tax profit jumped 134 per cent to VND3.5 trillion from 2015’s number.

The sharp increases in the group’s earnings result from rising revenues across all of its brands such as Vinhomes, Vincom Retail and retail store chain Vinmart and Vinmart+.

Among those segments, property business sales value was nearly VND37.3 trillion, a yearly increase of 76 per cent; sales in hospitality, tourism and entertainment activities hit VND4.25 trillion, an increase of 49 per cent from 2015; and sales growth from other segments varied from 25 per cent to 115 per cent compared to the previous year’s figures.

At the end of last year,…

How superstitions will hurt Vietnamese Brands