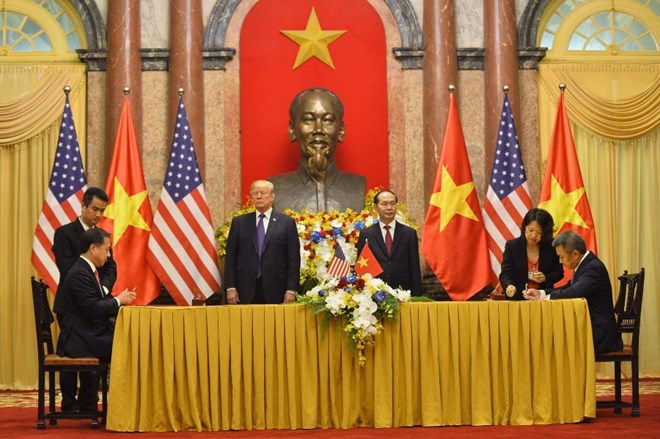 President Trần Đại Quang and President Donald Trump witnessed the signing of co-operation agreements worth a total of US$12 billion, mostly in aviation, petroleum and seaports between Việt Nam and the US after their talks in Hà Nội on Sunday.


The signing ceremony took place in the presence of President of Việt Nam Trần Đại Quang and President of the US Donald Trump, within the framework of the US President’s official state visit to Việt Nam. — Photo courtesy of VNA

The two parties also signed a memorandum of understanding on maintenance contracts covering these engines.

Thành said the engine the firm chose was highly fuel efficient and especially environmentally friendly, and comes with comprehensive repair arrangements which help the firm to increase operational efficiency and save on operating expenses.

“I believe that the agreement between Vietnam Airlines and Pratt & Whitney will further reinforce the important economic, trade and investment partnership between Việt Nam and the US,” said Thành.

Speaking at the ceremony, senior vice president of sales, marketing and customer support at Pratt & Whitney, Rick Deurloo, said he was proud to celebrate this momentous occasion with Vietnam Airlines.

“We’ve been powering Vietnam Airlines since the early 1990s when the airline received its first PW4000-powered 767. We look forward to continuing our strong relationship and long history with Vietnam Airlines,” said Deurloo.

Since its first operation in 2016, the GTF engine has shown strong performance with a reduction of 16 per cent in fuel consumption, 50 per cent in emissions and 75 per cent noise compared with the current engine.

Data-friendly YouTube Go comes out in beta in Thailand, Malaysia, Vietnam, and the Philippines