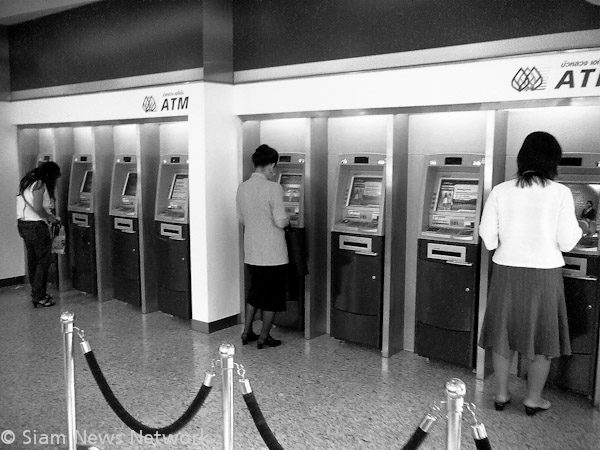 Most Thai banks showed improvement in quarterly net profit, with the fifth-largest Thanachart Capital (TCAP) marking the highest growth at 53.5 per cent in the third quarter after its acquisition of Siam City Bank (SCIB). Hefty profits chalked up by Thai banks this year have again given rise to criticism about the high cost of financial intermediation in Thailand.

Only Bangkok Bank and Bank of Ayudhya have not reported their quarterly results yet.

Among the seven Thai banks reporting results, combined consolidated net profit totaled Bt21.52 billion in the third quarter, up 23.79 per cent from the same period a year ago.

TCAP reported consolidated net profit of Bt1.54 billion in the third quarter, up Bt536 million or 53.5 per cent from the same period last year. It cited the business synergy after the acquisition of SCIB through product cross-selling and better performance in banking, insurance, life assurance, fund management and asset management. Its consolidated assets increased 83.8 per cent, or Bt385.29 billion, to Bt845.25 billion as of the end of September.

The merger of its subsidiaries Thanachart Bank and SCIB is still underway, TCAP said, adding that it was preparing a proposal to the Bank of Thailand. TBank’s net profit rose 5 per cent to Bt1.31 billion while SCIB showed an 8.9-per-cent increase to Bt1.03 billion.

The second-best showing was from TMB Bank, with consolidated net profit of Bt779.04 million in the third quarter, up Bt246.05 million or 46.17 per cent from the same period last year.

Siam Commercial Bank followed with a 24.6-per-cent annualised increase in net profit to Bt6.5 billion in the third quarter. Total loans rose by 9.8 per cent year on year basis. Its notable loan growth was largely attributable to the improving economic situation and lending across all business segments. SCB’s consolidated non-performing loans fell by 3.98 per cent, to the lowest level in more than 10 years.

SCB’s increase in consolidated net profit was largely attributable to a 7.9-per-cent rise in net interest income, a 29-per-cent year-on-year increase in non-interest income due to growing fee-based income in the card business, bank assurance, loan-related activities, and gains from the sale of a non-core equity investment.

Krung Thai Bank reported Bt4.99 billion in net profit for the third quarter, up Bt742 million or 17.46 per cent from Bt4.25 billion in the same period a year earlier. For the quarter, KTB showed a 13.11-per-cent annualized increase in interest and dividend income.

Market concentration is another determinant of a bank’s net interest margin. Banks in highly concentrated markets tend to collude and, as a result, thwart competition. They will thus be able to extract monopoly rents through higher rates being levied on loans and less interest rates being paid on deposits. Hence, we could expect to see high concentration rates being associated with high bank margins. In order and by assets, Thailand’s biggest banks are Bangkok Bank, Krung Thai Bank, Kasikornbank and Siam Commercial Bank (the country’s oldest).

Hefty profits chalked up by Thai banks this year have again given rise to criticism about the high cost of financial intermediation in Thailand. At the centre of the controversy are the allegedly high interest rate spreads – the issue of bank spread here has often been blown out of proportion – and the excessive fees charged by Thai banks.

The concept of “spread” has been subject to different interpretations. In its crudest form, it is measured as the minimum lending rate minus savings rate. It could also be viewed as the difference between the weighted average of deposit and loan rates.

However, an alternative concept of net interest margin – defined as the ratio of net interest income to interest-bearing assets – is often more prevalent as it is probably the best measure of bank profitability.

Since the economic cataclysm of 1997 Thai banks’ net interest margins have increased steadily from minus 0.7% in 1998 – massive borrower defaults in the aftermath of the banking crisis caused Thai banks to report negative net interest margins (NIM) – to 2.8% in 2005, before stabilising at around 3% during 2006-2010.

Empirical evidence shows that banks’ net interest margins vary across countries and among regions of the world, as well as between developed and less developed countries. Historically, less developed countries with financial imperfections are typically characterised by higher NIMs, thanks to high operating costs, lack of competition, the burden of non-performing loans and other factors.

Among Latin American countries, NIMs in Brazil, Peru and El Salvador reached a high of 14%, 8.1% and 7.5%, respectively, in 2009. Similarly, countries in Africa, notably Zimbabwe, Zambia, Sudan and South Africa recorded net interest margins of 34%, 9%, 8.4% and 7.2% respectively, over the same period.

The economists note that the currencies of emerging Asian countries face the strongest upward pressure because of changes in the destination of private capital. As flows to eastern Europe and Africa have shriveled, Asia’s share of the total flow of capital to the emerging world has gone from 61.3% in 2007 to 78.6% in the first half of 2010. Latin America’s share has also increased, from 15.2% to 20.9% over the same period. These are rising shares of a growing total, meaning that both regions are now getting more private capital than they were before the crisis.