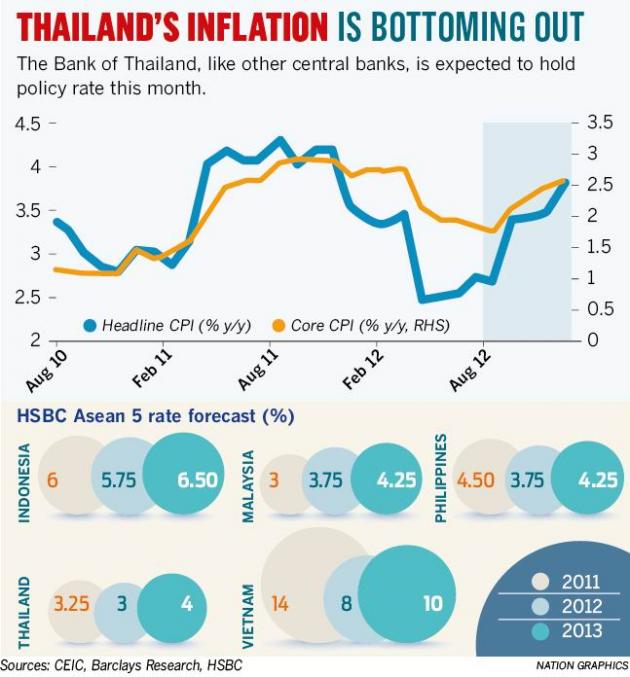 The Bank of Thailand’s Monetary Policy Committee is today expected to keep the policy rate at 3 per cent, where it has been since January, despite strong domestic demand and higher oil prices.

In line with the consensus, the Reserve Bank of Australia yesterday decided for a third time to keep its overnight cash-rate target at 3.5 per cent.

Barclays Research also expects no change in policy rates when the BOT convenes today and Bank Negara Malaysia meets tomorrow.Thailands inflation remained flat last month, staying at 2.7 per cent year on year, while core inflation moved lower to 1.76 per cent.The research house maintains its 2012 projections at 3 per cent for headline inflation and 2 per cent for core inflation.

“Todays print is unlikely to change the central banks dovish stance, as the recent drop in export-dependent industrial output and private consumption and weak agricultural income have increased fears of a slowdown,”

Barclays analyst Rahul Bajoria said, adding: “The risk of a cut in the next six months looks non-negligible.”In a speech in Bangkok yesterday, BOT Governor Prasarn Trairatvorakul insisted that domestic consumption and investment remained strong, despite impacts on the export sector.

via Policy rate expected to remain on hold at 3% – The Nation.

Thailand’s debt ratio will not exceed 60%