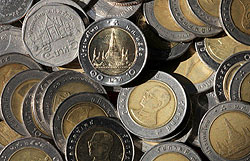 The currencies of China, Malaysia and Thailand are undervalued relative to the economies’ medium-term fundamentals, and the countries should focus on fiscal policy to support growth, the International Monetary Fund said Tuesday.

In its World Economic Outlook, the IMF said that while foreign-exchange movements since the global financial crisis had been consistent with demand rebalancing, gains in currencies of nations with external surpluses had halted over the past eight months.It warned that continued accumulation of international reserves was contributing to global imbalances and associated weaknesses, and said these were likely to remain above desirable levels unless governments take decisive action.

And the IMF argued that the policies that would “most effectively lower global imbalances and related vulnerabilities” would also serve the countries’ domestic interests.While countries with external deficits may need strong medium-term fiscal consolidation, “the requirements for emerging-market economies with external surpluses and undervalued currencies are to cut back official reserve accumulation, adopt more market-determined exchange systems, and implement structural reforms, for example, to broaden the social safety net.”