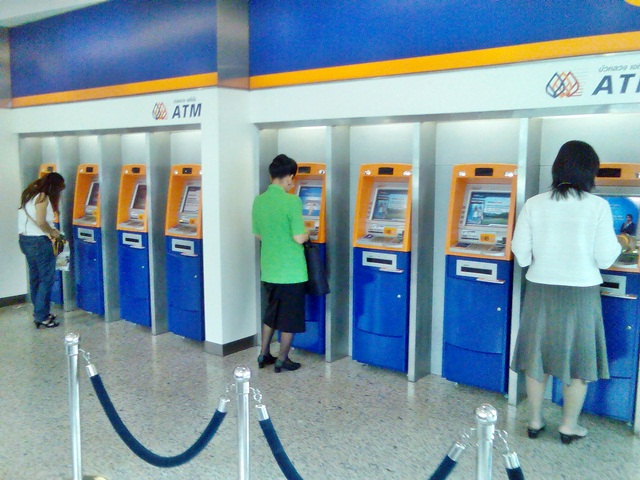 Overall net profit of 10 commercial banks is expected to record 31-per-cent growth to nearly Bt170 billion in 2012, though the fourth-quarter results were somewhat weakened by loan-loss provisions and cost-to-income ratios.

Asia Plus Securities said in a research note yesterday that in the fourth quarter alone, the profits of the 10 banks was expected to grow by 90 per cent to Bt40.2 billion year on year but shrink by 9.4 per cent from the third quarter.

Kiatnakin Bank, TMB Bank and Bangkok Bank are expected to show outstanding profit growth, according to Asia Plus.

Kiatnakin Bank, TMB Bank and Bangkok Bank are expected to show outstanding profit growth, according to Asia Plus.

KK’s profitability in the fourth quarter was driven by fee income from involvement in PTT Exploration and Production’s capital increase and another deal with Tesco Lotus.

Krungthai Bank is expected to witness a drop in profit due to the biggest loan-loss provisions. Asia Plus predicts the second-largest bank will report net profit of Bt4.87 billion, compared with Bt8.9 billion in the third quarter.

Kasikornbank and Bank of Ayudhya are expected to record declined earnings as well due to high loan-loss provisions and cost-to-income ratios.

via Banks set for 31percent surge in net profit – The Nation.

According to Oxford Business Group report on Thailand 2012

In many ways Thailand’s banking sector looks much like those of its neighbours: tightly regulated, well capitalised and highly risk-averse. Just as in other countries in the region, including Malaysia and Indonesia, the 1997-98 Asian financial crisis had a formative effect on bankers. Risk management has improved since the crisis, and central bankers are focused on system-wide stability.

Banking in Thailand is a notably Thai affair.

Just 14.5% of assets are held by foreign banks. Outsiders are subject to restrictions on branches and services. Among those foreign players who have chosen to buy a domestic bank instead of waiting for laws to be liberalised so they can build their own network, there are few success stories so far.

Further, the local preference for domestic banks comes not just from the laws and regulations but from the people themselves, who have demonstrated a lower comfort level with foreign lenders.

The market is set to open up to more foreign competition in 2015, but for now the Bank of Thailand (BOT), the central bank and regulator, is not issuing new licences. With 2015 approaching, Bangkok’s financial-services community has been pondering the possibilities. Most conclude that few foreign banks will challenge local banks’ dominance in the retail market. Buying in by acquiring a domestic bank is also harder now than in the past, as most big lenders are well capitalised and do not need outside funding. Likewise, incorporating several smaller players into one organisation would be complicated and costly.

Related Topics:siam commercial bank
Up Next

Bank of Thailand holds rates at 2.75%