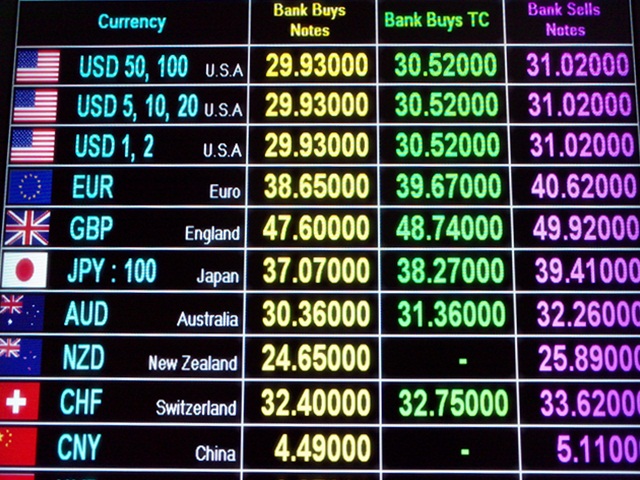 Bank of Thailand (BoT) Governor Prasarn Trairatvorakul expressed concern today at the rapidly appreciating Thai currency during the past two days but refused to commit regarding whether an intervention in the currency markets is underway.

He said the stronger Thai baht compared to US dollar is a consequence of short-term foreign investment in Thai bonds and the stock market through financial institutions – a signal of profit-taking by foreign investors.

The BoT governor warned foreign exchange investors to be extra cautious, giving assurances that the central bank is armed with measures to stem the baht appreciation which will be implemented when necessary.

The Thai currency is not that strong at the moment, he said. He refused to disclose if the bank will intervene, but said that Thai currency should move in tandem with the fundamentals and market mechanisms unless it has a negative impact on the country.

“There is cost in every intervention. We are closely monitoring the situation. It gains strength quite rapidly in the last two days,” he said. “We have the mechanism but I’m not saying that we won’t use it. We will if it’s good for the Thai currency.”

He indicated that the Thai baht’s movement, though significantly strong, is in the same direction as Asian and regional currencies, adding that it is natural that a currency is alternately strong and weak.

Calling on the private sector to be prepared for possible fluctuations arisen from changing risk factors, Mr Prasarn said BoT officials regularly meet with the Federation of Thai Industries and Thai Chamber of Commerce given Thai exporters’ unequal capabilities in adjusting to the situation.

The BoT governor said the stronger Thai baht has been a boon to  heavy machinery imports for infrastructure development while foreign investments have increased with a value of US$20 billion in direct investment and US$8-9 billion through investment portfolios.

Deputy Prime Minister/Finance Minister Kittiratt Na-Ranong admitted  that the rapid strengthening of the baht, at the daily rate of Bt.20, is not a positive sign and does not reflect the genuine economic situation.

He called on state agencies responsible for the country’s economy to ensure that the Thai currency does not gain strength to an extent of impacting Thailand’s export sector. (MCOT online news)

Thai exporters and business leaders yesterday urged policymakers to take steps to stem the baht’s appreciation in order to help protect the country’s price competitiveness. But Finance Minister Kittiratt Na-Ranong played down the impact of the stronger currency on the overall economy and instead urged businesses to accelerate investment abroad.

Bank of Thailand left its benchmark interest rate unchanged at 2.75 per cent on Jan. 9th, saying the global economy continued to recover while growth this year could be higher than thought and inflation was stable.

The central bank said its seven-member Monetary Policy Committee (MPC) unanimously agreed to hold the one-day repurchase rate for the second straight meeting after a surprise quarter-point cut in October. The MPC viewed that, with remaining uncertainties in the global economy and inflation forecast within target, the current monetary policy stance was appropriate in supporting domestic demand to sustain growth momentum. The MPC will, however, continue to closely monitor financial stability risks that may arise from persistently high credit growth, rising household debt, and volatile capital flows.