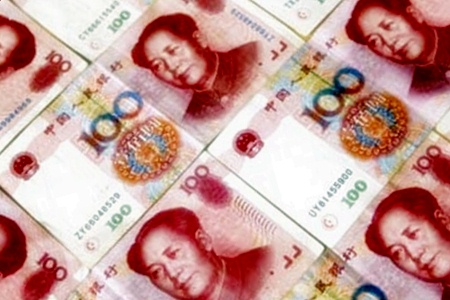 The Bank of England recently announced it has reached an agreement with the People’s Bank of China to establish a currency swap arrangement. That could make London the European hub of Renminbi trade, which has increased rapidly since currency restrictions were liberalized in 2010.

In Asia, direct trade in Renminbi has been underway for some years, and, as CCTV correspondent’s Tony Cheng reports, Thailand has seen a sharp rise in usage of China’s currency.

Money makes the World go round and for decades, that money has been US dollars. Increasingly however Renminbi is being used in direct trade.

And in Thailand, research by one of the Kingdom’s leading banks has shown Renminbi direct trade has increased five times in the past year. The growth area is between SME’s. 6 months ago Nutsakol Charoensatit set up a small company selling preserved fruits. Canned Durian and Mangosteen in syrup are his best sellers, and the main market is Southern China. He finds trading directly in Renminbi is actually more stable than dollars.

Nutsakol Charoensatit, Managing Director of Charoen Dessert Co., said, “Nowadays it is pretty good because the currency rate doesn’t swing too much, and if we do exchange we tend not to lose out because of currency fluctuations.”
Read More Here : Direct trade in RMB increases in Thailand – People’s Daily Online

Most analysts estimated that the yuan as of 2010 was still undervalued by 25 to 40 percent, which gives China a huge advantage in international trade. U.S. manufacturing groups blame the Chinese currency for a loss of more than 1 million jobs. If the United States formally labels China a currency manipulator it can claim that China uses a low-valued yuan to give it an unfair trade advantage and the yuan can be treated as subsidy that boosts duties on Chinese imports.

Non-Chinese have argued that a stronger yuan will not only help foreign countries it could benefit China by reducing its reliance on exports and generate strong demand at home, which some argue marks the path for more stable sustainable growth in the future. According to the Economist: “In the long run, a stronger yuan would benefit China’s economy—and the world’s—by helping shift growth from investment and exports towards consumption. It would boost consumers’ purchasing power and squeeze corporate profits, which have accounted for most of China’s excessive domestic savings.”

How to go about increasing the value of the yuan is a matter of some debate. Increasing its value slowly would encourage speculators and create dangerous hot-money inflows. Raising it in a dramatic one-off increase would put many exporters out of business overnight.

According to the Economist:

‘Some Chinese economists warn that the benefits to the United States for the yuan revaluation are much exaggerated. In particular, a stronger yuan would not significantly reduce the U.S. trade deficit. There is little overlap between U.S. and Chinese production, so U.S. goods could not simply replace Chinese imports. Instead, consumers might end up paying more for imports…This would be like imposing a tax on U.S. consumers.”

Dollar: towards the end of the “exorbitant privilege” ?

Thailand to Be Removed from Money Laundering Blacklist

The Bank of Thailand stated that the central bank does not support the use of digital currencies for making payments, due to their high price volatility and the risks of cyber-theft.