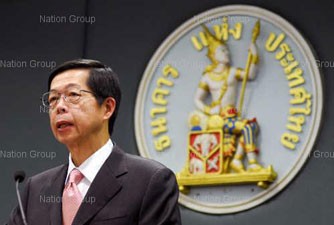 The Bank of Thailand’s Monetary Policy Committee on Wednesday voted 6-1 to maintain its benchmark interest rate at 2.5 per cent.

“The MPC deems the current accommodative monetary policy to be necessary and appropriate for the ongoing adjustments of the Thai economy,” MPC secretary Paiboon Kittisrikangwan said.

One member voted to lower the policy interest rate by 25 basis points, to support the continuity of growth next year. The decision came a day after the Thai economy was announced to have shrunk unexpectedly in the second quarter of the year.

A 0.3 per cent contraction in gross domestic product between April and June followed a previous fall of 1.7 per cent during the first quarter of 2013, registering a 2 per cent dip for the first six months of this year.

The Thai economy continued to soften in the second quarter, broadly in line with the committee’s previous assessment. Private consumption, particularly automobiles and durable goods purchases, slowed down due to waning stimulus from first‐car tax rebate measures as well as higher household debt burdens. Exports weakened in line with subdued economic growth in the region, the statement said.

“In the periods ahead, domestic demand and exports are expected to gradually recover, with some risks of delay. Supply‐side constraints may also play some part in holding back growth of private investment and exports, the MPC said.

The SET index extended its loss for three consecutive day in tandem with other regional markets thanks to concerns over the US Federal Reserve’s potential stimulus tapering and Thailand’s sluggish economic growth.