The Thai baht rose to 33.94 baht per USD, a record high in the past two years after the Bank of Thailand (BOT) decided not to take measures to stop the rise of the domestic currency.

Previously, in April, BOT imposed measures to scale back short-dated bond sales in an effort to lower short-term fund inflows, which strengthen the baht. The measures are still in place.

The Bank of Thailand remains worried about a strong baht and short-term capital inflows, the governor said to the Bangkok Post, as the currency traded near its highest against the dollar in more than 22 months.

But the move failed to prevent the bath to continue on its rising trend. The baht edged up to 33.94 to the dollar Tuesday, marking its highest point in nearly two years. The local currency is one of the best-performing currencies in the region this year, rising about 5% against the dollar. 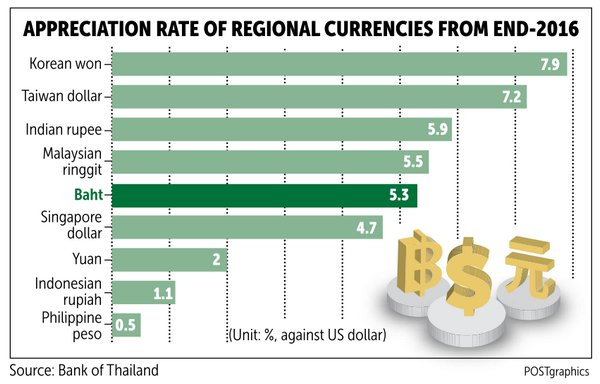 The Thai baht is one of the best-performing currencies in Asia, ranking fifth since 2016, following the won of the Republic of Korea (up 7.9 percent), Taiwan dollar (7.2 percent), Indian rupee (5.9 percent) and Malaysian ringgit (5.5 percent).

Past moves to try to weaken the baht have failed. Some business analysts believe Thais just prefer to keep their money at home and don’t like to invest in foreign assets.

On Wednesday the 7th of June The central bank has left interest rates unchanged despite a bout of deflation. A lack of inflationary pressures signals the benchmark will stay at 1.5 percent through the third quarter of next year, according to a Bloomberg survey.

In related news, the Bank of Ayudhya, one of the local leading banks, raised its baht forecast average by 34.50 baht per USD at the end of the year from 35.50 previously because of greater uncertainties, particularly the US monetary and trade policy.

According to Kasikornbank in Bangkok, Thailand had the world’s third largest surplus in 2016 – 11.3% of gross domestic product, trailing only Singapore and Taiwan.

Related Topics:bahtbank of thailand
Up Next

Moody’s has changed the outlook for Thailand’s banking system to negative from positive. The operating environment for the country’s banks will deteriorate in the next 12-18 months due to disruptions from the coronavirus outbreak, and this will lead to a weakening of banks’ asset quality and profitability.

Commercial banks in Thailand have offered refinancing services to some 30,000 clients, worth 234 billion baht in total.

All commercial banks in Thailand have pledged to offer special financial aid to customers and businesses affected directly or indirectly by the economic implications of COVID-19, ensuring sufficient cash for customers to make withdrawals at any time.

In a bid to lessen pressure on the Thai baht, the Bank of Thailand has increased to $1M the limit for foreign funds that do not need to be repatriated

The Bank of Thailand has relaxed foreign exchange regulations by increasing the threshold for proceeds that do not need to be repatriated from current $200,000 to USD 1,000,000 .