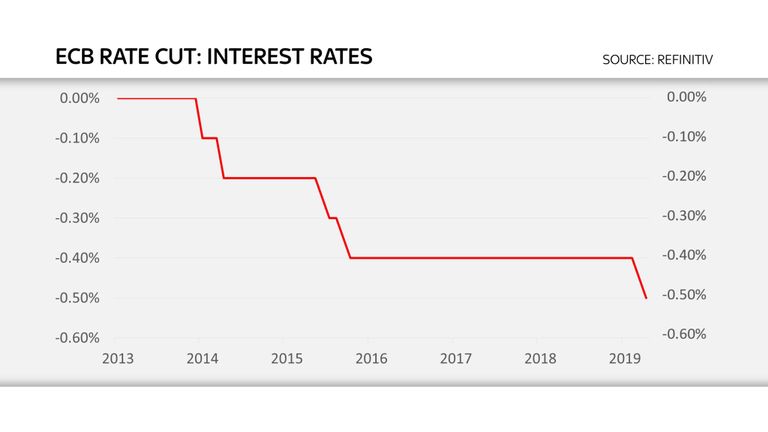 Back in the 1980s and 1990s, financially sound governments had to pay interest rates of 6-8 percent in order to borrow.

Will your bank pay you to borrow money?

Fast forward to today and there is about US$16 trillion worth of bonds trading with a negative yield. Some governments – like Germany’s – can borrow at any horizon (from 3 months to 30 years) at negative rates. And in Denmark, we have seen the first mortgages with negative interest rates. Yes, you read that right, imagine getting paid to borrow to buy your house.

What is a negative interest rate?

Remember your first economics class: Do not mistake real and nominal variables. Real variables are adjusted for inflation and are the ones that matter (hence the “real”).

Real interest rates have been negative before, in periods where inflation was surprisingly high making the real return become negative. We see this phenomenon now in hyperinflation environments, and we saw it in advanced economies during the 1970s.

What is unique about our current environment is the combination of very low real interest rates and very low inflation. This mix has produced the lowest nominal interest rates ever seen and that are now negative in some cases.

Negative nominal interest rates can be seen as an anomaly because there is already an asset that pays 0 percent: Cash.

If you stash some bank notes under your mattress, their value remains constant over time. Because of this, economists like to refer to 0 percent as the “zero lower bound on nominal interest rates”. But, as we are in the midst of finding out, 0 percent is not the true lower bound.

The reality is that a corporation storing its millions in cash is not a feasible proposition and, as a result, interest rates as low as -1 percent can be seen today in financial markets.

But forget about squirreling away your cash, back to fundamentals, what is going on with real returns? Why should they seem so low relative to previous decades?

It’s all supply and demand

In 2005, Ben Bernanke, a few months before becoming the US Fed chair, offered an explanation for low interest rates based on the simplest possible economic model: Supply and demand. Interest rates are price-determined in a market where some individuals try to save (the supply) and some individuals, companies or governments attempt to borrow (the demand).

Bernanke’s hypothesis was that we were witnessing a global saving glut. For 10 years, a diverse set of forces increased the supply of saving. The countries most likely to pursue this behaviour were China, Japan and other Asian economies, Germany and oil producing nations.

As these savers were chasing a limited supply of investment opportunities, they drove up the price of any asset they bought, leading to low returns. Interest rates were low, and most asset prices became high, leading to the mistaken perception that every asset was in a bubble.

Thailand’s loss of trade privileges with US is credit negative