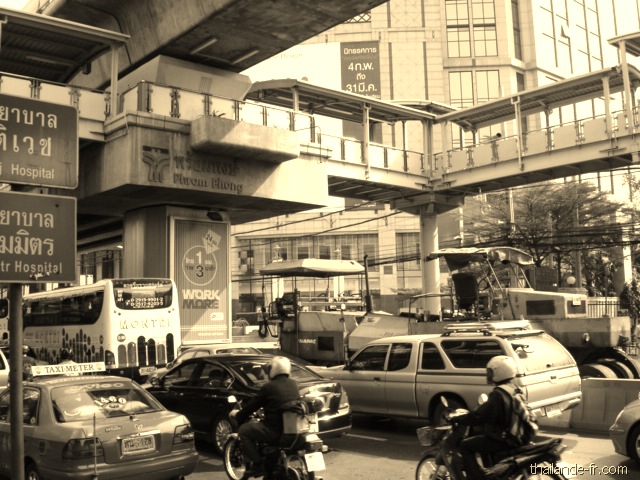 Executives of Frances largest companies affirmed they had no plan to withdraw investment from Thailand and was considering investing more in the country, according to Foreign Minister Kasit Piromya.Mr. Kasit made the revelation during his official visit to Europe as part of the government’s effort to restore foreign investor confidence in Thailand.

The foreign minister had an opportunity to discuss with executives of the French Employers Council comprising representatives of major companies such as Michelin, Alcatel, Airbus, and Casino BigC.Interviewed after the meeting, he explained Thailands political atmosphere and direction to the representatives of the French private sector.They remain confident in Thailand and affirmed their companies had no plan to withdraw investment from Thailand. In contrast, the firms planned to invest more and were ready to give full cooperation.

via Top French firms still confident about investing in Thailand.

On 21 June 2010, the first day of the official visit to Europe, Foreign Minister Kasit Piromya met with France’s Foreign Minister, executive directors of UNESCO and OECD as well as had a meeting with Team Thailand comprising officials from various agencies who are representing Thailand in working with the Belgian side as well as the European Union.

In the morning, after having a meeting with Team Thailand at the Royal Thai Embassy in Paris where Foreign Minister briefed the meeting on the latest developments in Thailand’s political situation and discussed on work-plan to further promote Thailand, Foreign Minister Kasit called on Mr. Bernard Kouchner, the French Foreign Minister.  The Thai Minister exchanged views with his counterpart on the areas of mutual interest with an aim to further strengthen bilateral ties between the two countries and reaffirmed France as Thailand’s strategic partner in Europe.  In this connection, both sides signed the Agreement on Visa Exemption for Short Stay for Diplomatic Passport as well as the 2nd Joint  Action Plan between Thailand and France for the year 2010-2014, establishing framework for bilateral cooperation including the areas of politics, economy, culture, education, energy, and security. The said Action Plan provides a solid platform to promote and strengthen the cordial relations between the two countries. In this occasion, Foreign Minister Kasit also took this opportunity to explain to his French counterpart the latest developments of the current political situation in Thailand and the Royal Thai Government’s strong intention to solve the problem focusing on national reconciliation plan and the respect on rules of law. Thai Foreign Minister also reiterated that Thailand was interested to learn the best practices from France in such areas as good governance, education on science and technology, and the successful story of French small business model.

In the afternoon of the same day, Foreign Minister Kasit met with Mr. Francesco Bandarin, Assistant Director-General for Culture of the UNESCO, and Mr. Mario Amano, Deputy Secretary-General of the Organisation for Economic Co-operation and Development—OECD). In the meeting with UNESCO, the Foreign Minister affirmed that Thailand stood ready to work with UNESCO in the areas of education, science, and culture. Particularly, in form of trilateral cooperation which UNESCO, Thailand, and the third country could pursue cooperation in providing assistance to the needed developing countries together.  Moreover, he stated that Thailand was interested in promoting the cooperation between UNESCO and ASEAN in studying the regional historical route reflecting the strong cultural connectivity between the ASEAN member countries. In the meeting with OECD, Mr. Amano expressed appreciation for Thailand’s active role as OECD’s observing country as well as member of its Development Center.  Both sides exchanged views on prospect for further cooperation in a number of areas including anti-corruption, good governance and science and technology.  The Thai side took note that OECD is working on the study focusing on the overview of economic of Southeast Asian region and that it will organize a seminar in Thailand on the subject.

In the evening of the first day of his official visit, Foreign Minister Kasit attended the welcoming dinner at the residence of Thai Ambassador to France in Paris. He met with Honorary Consuls of Thailand in France and Monaco as well as members of the Friends of Thailand network in order to update information on latest developments with regard to political situation in Thailand.  The Minister also expressed appreciation for the understanding and continued support

On the second day of his visit, just before moving on to Brussels, Belgium, the Minister met with a group of French businessmen.  Some are from business that has long invested in Thailand and some are relatively new to investing in Thailand.  The businessmen expressed full confident in Thailand and the present government including its handling of the recent political situation.  The Minister welcomed the group’s plan to bring new investors to visit Thailand in the first month of next year in order to learn more about Thailand, its potentials and existing prospects.