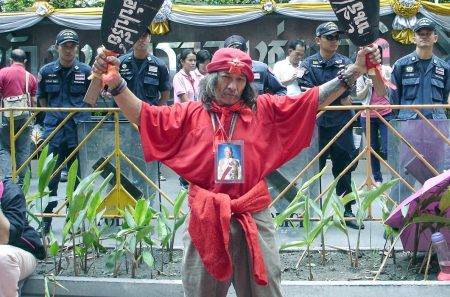 The Red Shirts’ protracted occupation of a central Bangkok area and the eventual violent and deadly end in May 2010 reiterated the highly divisive situation in Thai politics.

This protest, like the Yellow Shirts’ closure of the Bangkok airport toward the end of 2008, had the potential to have extended negative impacts on the broader economy, particularly on foreigners’ confidence. Luckily, the impacts have so far been short-term, partly because these protests and the associated violence were not directly targeted at foreign interests. Thus, while tourist arrivals in May 2010 declined by 10.5 per cent from May 2009, total arrivals between July and November 2010 increased by 10.7 per cent compared to the same period last year.

Many have tried to link the political divisiveness to socio-economic disparities. This is highly misleading.

Many have tried to link the political divisiveness to socio-economic disparities. This is highly misleading. The divisiveness is really only around one person, Mr. Thaksin Shinawatra, the currently fugitive former Prime Minister. To most people, Mr. Thaksin evokes strong emotions, they either adore him or despise him. There are families in all segments of Thai society where husbands and wives cannot discuss politics or Mr. Thaksin, as this can quickly lead to family break up. This is similarly true for many siblings.

Thai politics will remain divisive for some time. Talks of reconciliation are just red herrings. How can one reconcile black and white? Fortunately, there will be a general election in 2011. This should reduce the risk of another major protracted street protest as the various political factions need to position themselves to win votes in the election, and causing major public inconveniences is a sure way to get a backlash in the polling booths.

However, no matter who becomes the government after the election, the political divisiveness will not disappear. So from the economic standpoint, the best scenario to hope for is a clear separation between political divisiveness and instability, and economic policies and economic development. Actually, this used to be the norm for Thailand back in the 1980’s and 1990’s. The government during that time changed very often, but economic policy directions remained fairly much the same, and the economy performed quite well (except of course after the 1997 crisis). So it is not just wishful thinking to hope for such a scenario again.