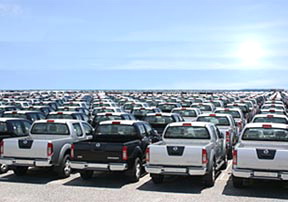 The domestic sale of motor vehicles in Thailand surged by 44.2 per cent to 78,039 units in February, with Toyota retaining its predominant market share of 30,592 units, up 44.2 per cent, and Isuzu, ranked second largest with 14,713 units, up 22.2 per cent, an informed source in the automotive industry revealed on Wednesday.

Supported by a hard-work ethic, steady investment and generous government incentives, Thailand’s automotive industry is poised for accelerated growth. Currently employing more than 300,000 people and generating 12% of the national GDP, the auto industry is respected as one of the biggest manufacturing sectors in the country.
Thailand’s industry has attracted virtually all of the world’s major automakers, assemblers, and parts and component manufacturers, and many are planning further investment. Ford, General Motors, BMW, DaimlerChrysler, Mitsubishi, Mazda, Toyota, Isuzu, Honda and Nissan all have an established presence in the country, together accounting for the lion’s share of the nearly 1.4 million vehicles produced here in 2008. That is a far cry from when Thailand had just one automotive assembly plant in 1961.

Truly a global player, the Thai industry has expanded from its days as strictly an assembler into a major automotive production center. Automotive exports totaled 775,652 units in 2008. With shipments steaming to 130 countries, Thailand is currently the world’s largest producer of one-ton pickup trucks and the seventh-largest automotive exporter overall. It is the top manufacturer in all of Southeast Asia, with measures in place for expansion.

And it’s not just production. More foreign makers now appreciate Thailand as a prime location for R&D investment as well. For example, in recent years Toyota has established a technical facility here to conduct R&D work on product design, testing and evaluation. Moreover, Toyota Tsusho Electronics (Thailand) Co., Ltd. was established in 2005 as a joint venture between Toyota Tsusho Electronics Co., Ltd. and the Toyota Tsusho Group to develop embedded software for automotive applications. Thailand, in fact, is the only country outside of the 30-nation Organisation for Economic Co-operation and Development in which Toyota has such sophisticated facilities.

The average wages for manufacturing workers in China are USD 412.50 a month, compared with Thailand’s USD $245.50, Malaysia’s USD 666 and USD 129 for Indonesia, according to a 2009 report on the International Labour Organisation’s website.