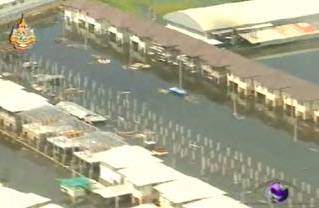 The ongoing flood crisis has impacted more than 10,000 businesses in 15 provinces, affecting over 350,000 workers, according to the Labour Ministry.

The Department of Labour Protection and Welfare also reported that if the floods continued, 100,000 more workers were at risk of being laid off, explaining that business operators may be unable to rehabilitate their businesses and factories in time and may be unable to continue paying wages in the long run.

Meanwhile, the workers, who were not fully paid, will be forced to find new jobs. Some of them may join the ranks of the unemployed.

via Over 350,000 workers affected by floods in 15 provinces: Labour Ministry.

Thailand supplies around 60% of the world’s HDDs, with other Southeast Asian countries like Malaysia and Singapore picking up the slack. So any shutdown of factories in Thailand has a ripple effect on the computer industry.