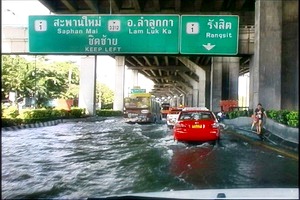 The prime minister interviewed with CNN about the flood situation and said that since Bangkok is an important area in Thailand, it will be protected as much as possible, and that she is greatly concerned about the distress among residents.

Prime Minister Yingluck Shinawatra gave CNN an interview on Sunday, saying officials from all related units are doing their best to manage the water-level of dams and the effectiveness of the dikes to handle the unusual torrential downpours of the rainy season.

She said her main concern is the people who are distressed by the flooding, adding that Bangkok will be protected as much as possible because it is an economic hub of Thailand.

CNN reported that the Thai government has decided to let the water flow through the canals in Bangkok and its suburbs, including Rangsit District, to prevent the water from flowing into the inner city.

The flooding in this year is said to be the worst flooding in over half a century, and some areas may continue to suffer from flooding for another month before the water levels decrease.

CNN further reported that the water is now flowing towards Don Muang Airport and Thammasat University Rangsit Campus, which are temporary shelters for the flood victims.

The government asked victims to evacuate from both Don Muang Airport and Thammasat University Rangsit Campus to other evacuation centers provided at government offices for safety reasons.

The Ratchamangkala Stadium was declared as a temporary shelter for flood victims evacuated from Don Muang Airport and Thammasat University Rangsit Campus.