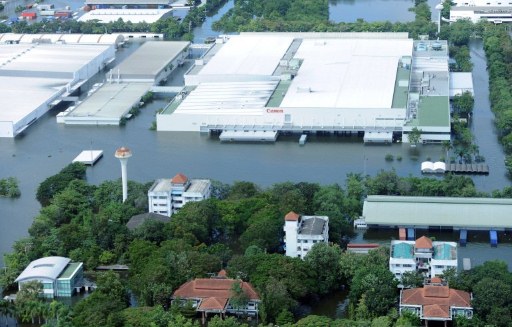 Mr Suphap said that a total of 9,859 factories have closed – both inside and outside the industrial estates affected by the worst flooding — while the disaster has affected at least short-term and perhaps longer-term unemployment for 660,000 workers who were employed by the factories. Seven industrial estates in Ayutthaya and Pathum Thani — Saha Rattana Nakhon, Bang Pa-in, Rojana, Hi-Tech, Factory Land, Nava Nakorn and Bangkadi — were earlier forced to close due to the deep floodwater.

Flooded Canon factory at an industrial estate in the hard-hit province of Pathum Thani, north of Bangkok. Picture: MCOT News

He said 838 factories in the seven industrial parks and estates in Ayutthaya and Pathum Thani were hit by the flood and that 382,693 workers were unemployed which caused direct damage of nearly Bt500 billion, while indirect damage could add another Bt300 billion to the losses.

Mr Suphap said the ministry would set up a working group to inspect all factories to evaluate the damage incurred. Details and exact costs of the collective damages wil be submitted to the government for its consideration of extending assistance.

via Nearly 10,000 factories damaged by flood.

Flooding in Bangkok to Cost $2.6Bn per Month