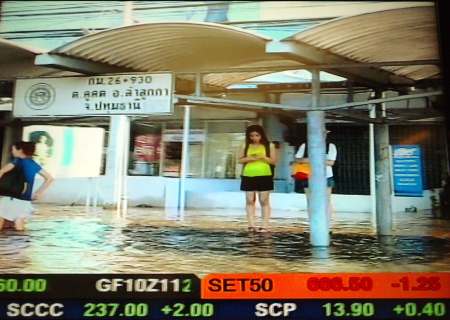 Flooding in Bangkok, if it lingers longer than 3 months, will cost 250 billion in economic losses, according to a senior officer of the Thai Chamber of Commerce (TCC).

Pornsilp Patcharintanakul, deputy secretary-general of the chamber, warned of the economic fallout after Bangkok Governor Sukhumbhand Paribatra said that Bangkokians in all 50 districts must brace for the massive deluge from the North.

Bangkok should be restored to normalcy within three months, otherwise it would cost the city 250 billion baht in economic losses or 83 billion baht a month

Mr Pornsilp said the capital’s gross domestic product (GDP) amounts to one trillion baht annually, therefore the government must urgently tackle the flooding situation and salvaging the capital through water draining to the sea.

“Bangkok should be restored to normalcy within three months, otherwise it would cost the city 250 billion baht in economic losses or 83 billion baht a month,” he said. “The longer the flood, the more losses incur to its economy.”

via Failure to salvage capital within 3 months would cost Bt250 billion.

Prime Minister Yingluck Shinawatra on Thursday assigned officials and water experts to conduct aerial surveillance over the capital for the possible cutting of four roads in eastern Bangkok to drain more floodwater to the sea, more quickly.

The move came after Ninnart Chaithirapinya, representing private sector engineers, met the prime minister and advised that the method would help the deluge pass through eastern Bangkok to the sea.

To minimise flood damage in inner Bangkok, the four roads which block the waterflow — Pracharuamjai, Ratcha-uthit, Suwinthawong and Ruam Pattana — should have a 5-6 metre width channel cut through each and use steel bridging to link the road in order to allow volume of 60 million cubic metres (MCM) of floodwater to pass through it daily, he said. To combine with water releasing from eastern canals, as much as 100 MCM of water daily could be drained to sea with water pumps in full operation.