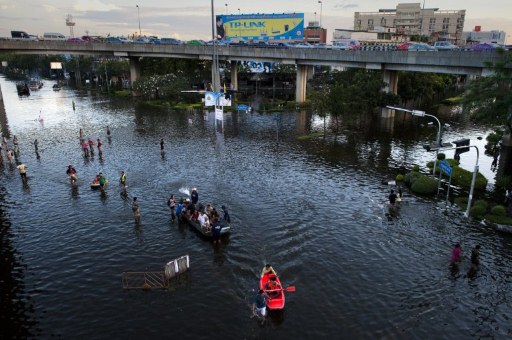 Post-flood rehabilitation could take at least three months with an estimated budget of Bt80 billion, plus loans of over Bt300 billion for flood victims, Prime Minister Yingluck Shinawatra said on Monday.

For industrial estates, the prime minister said information will be gathered for specialists to consider what form of rehabilitation should be conducted, including draining water from flooded industrial estates and building permanent dykes.

Technical specialists will help restore machinery and the Thai government will apply tax exemption measures to help affected industries while the Japan Bank for International Cooperation (JBIC) will provide loans to Japanese companies investing in Thailand.

Ms Yingluck said more pumps will be purchased to drain water out of industrial estates and she ordered the Energy Ministry to start working in areas where flood has receded.

Moreover, to regain the confidence of foreign investors, the Ministry of Foreign Affairs will explain the rehabilitation and long-term management plans, she added.

Meanwhile, Kongkrit Hiranyakit, president for policy and planning of the Tourism Council of Thailand, said the current flooding took its toll on both Thai and foreign tourists. In particular the number of local tourists has fallen by 20-30 per cent, or 70,000 a day from 250,000 a day in normal situation.

The flooding however has become a boon for major tourist destinations like the seaside resort towns of Hua Hin and Pattaya where local tourists take refuge away from the flood-affected capital.

Regarding projected foreign arrivals in the fourth quarter of 2011 forecast at five million, Mr Kongkrit said the number was likely to drop by 20 per cent or between 700,000-1 million, amounting to Bt20-30 billion in losses as a result of the latest warnings issued by some foreign governments which advised their nationals to avoid travelling to flood-hit Thailand.

Earlier Monday the prime minister said she was confident that her government will successfully protect inner Bangkok areas from inundation as the water drainage in eastern Bangkok is satisfactory but the situation in western Bangkok remains a cause for concern.

“The current situation is being relieved. Even the upcoming high tides next month will not be a problem. By that time, a large portion of water in the capital would have been drained out to the sea,” the prime minister said. “The level of floodwater would not be as high as now.” (MCOT online news)

via PM: Post-flood rehabilitation could take 3 months at earliest.

Flooding in Bangkok to Cost $2.6Bn per Month