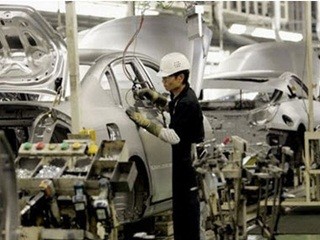 Thailands auto production in October 2011 hit a record low of 49,439 units for the past 112 months as a result of continuing mega floods, according to Surapong Paisitpatnapong, spokesman of the Automotive Industry Club of the Federation of Thai Industries FTI.

Auto production in October dropped 67.62 per cent year-on-year, and 71.62 per cent compared to the previous month.The flooding situation in the central provinces, where many industrial estates are located, has led to a shortage of parts to be supplied to automobile assembly plants.

The stoppage of production could cause the industry a loss of Bt3-4 billion per day.Due to auto parts shortage from the flood crisis, domestic car sales in October also fell to 42,873 units, 50.73 per cent down from September and a 40.5-per cent decrease year-on-year, despite high demand.

Flooding situation likely to cut 2011 production to 1.5 million units from a target of 1.8 million

Although automakers such as Nissan, Mitsubishi, Ford and Mazda resumed their operations Monday Nov 14 and Toyota will soon follow suit on Nov 21, Mr Surapong said the flooding situation is likely to cut this year’s total volume of production to 1.5 million units from a target of 1.8 million units.

Car production for export in October was recorded at 22,856 units, a 71.87 per cent drop year-on-year. From January through October 2011, car production for export amounted to 679,052 units, a reduction of 9.61 per cent compared to the same period last year, counting as 50.88 per cent of the total car production.  Meanwhile, auto exports fell to 50,913 units in October, a decrease of 36.64 per cent year-on-year, and down 43.84 per cent compared to September. The export value in October was at Bt22.5 billion, a 35.08 per cent drop from the same period last year.