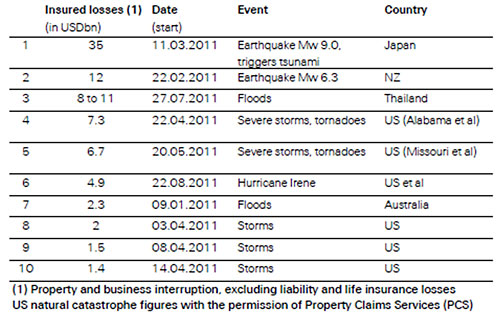 2011 will be the year with the highest catastrophe-related economic losses in history, at USD 350 billion2011 would have been the costliest year ever for the insurance industry if Japan had been more fully insured.

This is more than double the figure of USD 48 billion in 2010. Claims from natural catastrophes alone reached USD 103 billion in 2011, compared to only USD 43 billion last year.

Year of highest ever economic losses

In 2011, total economic losses to society both insured and uninsured due to disasters reached an estimated USD 350 billion, compared to USD 226 billion in 2010.

The earthquake in Japan accounts for most of this year’s economic losses. More than 30 000 people lost their lives due to catastrophes in the first eleven months of the year, most of them in Japan.

Kurt Karl, Swiss Re’s Chief Economist, says: “2011 is going down as another year of very tragic and costly earthquakes. Unfortunately earthquake insurance coverage is still quite low, even in some industrialised countries with high seismic risk, like Japan.

So on top of people losing their loved ones, societies are faced with enormous financial losses that have to be borne by either corporations, relief organisations or governments and, ultimately, taxpayers.”

With approximately USD 108 billion in insured catastrophe losses, 2011 ranks as nearly the most expensive year for the insurance industry according to sigma records, second only to 2005 USD 123 billion.

Moderate hurricane losses have kept costs lower than in 2005, the year when hurricanes Katrina, Wilma and Rita alone caused claims of over USD 100 billion.If Japan had been as well insured as other countries with high seismic risk, such as New Zealand, the overall industry tally would have been much higher. Even so, in terms of catastrophe claims, 2011 ranks as the second costliest year in history for the insurance industry.

Additional claims from the ongoing massive floods in Thailand or from winter storms which may yet hit Europe have the potential to bring figures for the full year even closer to the record claims of USD 123 billion experienced in 2005. In addition to the earthquakes in Japan and New Zealand, severe flooding in Thailand and Australia triggered above USD 10 billion in insurance claims. Two massive tornado events in the United States caused nearly USD 14 billion in claims and the loss of more than 400 lives. Hurricane Irene cost the industry nearly USD 5 billion in property damage.

via Sigma – preliminary estimates for 2011 | Swiss Re – Leading Global Reinsurer.