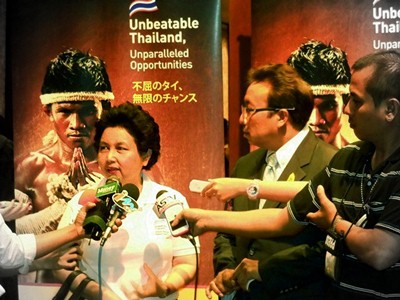 With the support the ministry of Industry, BOI announced on March 2nd in Bangkok the launching of its new campaign to regain investor’s confidence. The Japanese community is the main target of this new campaign, as Japanese investors have suffered the most during the recent flooding.

The campaign will start in Japan as the Prime Minister, Yingluck Shinawatra, is on state visit. “Unbeatable Thailand, Unparalleled opportunities” is meant to answer Thailand’s new priority to restore its image as a preferred trade and investment destination and to strengthen investor confidence in the country’s economy.

“Unbeatable Thailand, Unparalleled opportunities” is meant to answer Thailand’s new priority to restore its image as a preferred trade and investment destination

The Japan Chamber of Commerce (JCC), which represents 1,370 Japanese firms operating in Thailand, has been taking questions from its members on whether the floods will hit Thailand again this year. This reflects the concerns of not only Japanese but all foreign investors in Thailand. About 70 % of Japanese plants damaged by the severe inundation last year now are able to resume their operations, while 20 per cent are not yet ready.

The Japan International Co-operation Agency (JICA) is cooperating with the Thai government in designing the flood-prevention system.

“Japanese and foreign investors here in Thailand export 50 per cent or more. Toyota, for example, exports pickup trucks to 113 countries, and it plans to increase the export volume of passenger cars as well. We believe that other products would do the same,”

said Tanada, who is president of Toyota Motor Thailand.

In the past 50 years, Thailand has had to face some challenges, such as natural disasters for instance, and deal with their negative impact on businesses. The capacity to recover such setbacks is a priority for the global economy and international trade. The Thai government wishes to announce the new measures and policies that will be taken in order to help investors and business operators to recover in such cases, and therefore lower the impact of any future challenges.

The main argument of the BOI in this campaign is Thailand’s ability to recover and overcome any issue, coming back stronger when facing an economical obstacle. The BOI is in fact pointing out Thai Fighting Spirit, saying it is “embedded in the DNA of all Thai people”.

The fact that business, industrial and service sectors are recovering from last year’s flood at a rapid pace is an argument the government wants to show international partners, in order to keep the growth rate of investments in the country. “Unbeatable Thailand” illustrates that spirit of fighting and risen above difficulties thanks to the country competitiveness and the unique strategy location, strong by its infrastructure and its skilled and thriving economy.

BOI to demonstrate Thailand’s potential as an investment destination.

“Unparalleled Opportunities” refers to the variety of the different business opportunities in the country, from the agriculture to the automobile industry, as well as the electronic or electrical sectors. In fact, Thailand could become to this day the production base for the new ASEAN global market which would account for more than 600 million people.

Thailand is starting with Japan as they are confident in the trust of their Japanese investors, which have massively confirmed their participation to the campaign-related events. A good collaboration as well as a convincing “Thai Fighting spirit” should ensure the international investors’ confidence in Thailand and protect the global economy, as well as Thailand’s position in Asia. After Japan, the Thai government should try to take the campaign to other neighbors, starting with China and South Korea, their strong target.

Many events are already planned and the campaign should hopefully be a success in restoring Thailand’s international image as one of the main economic powers in Asia.

In 2007, Japan and Thailand signed on Japan-Thailand Economic Partnership Agreement (JTEPA) and it came into effect. JTEPA is expected to enhance trade, investment and cooperation between two countries. The total trade volume between Thailand and Japan as well as Japan’s direct investment in Thailand had increased after JTEPA came into force.