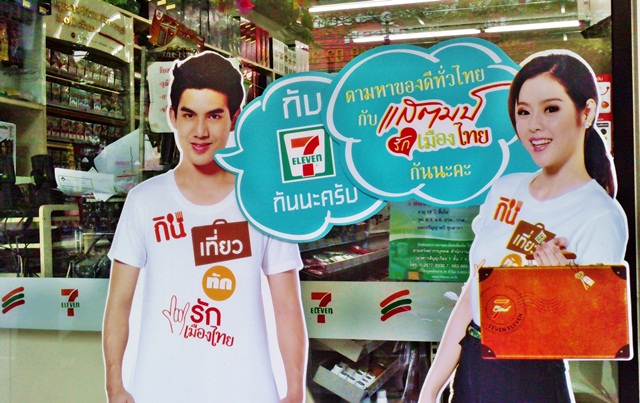 CP All Pcl (CPALL), (Charoen Pokphand Group or เครือเจริญโภคภัณฑ์) the world’s third- biggest operator of 7-Eleven convenience    stores, said it plans to expand its network in Thailand to 10,000 outlets by 2018 to maintain annual profit growth at 15 percent.

The company, controlled by 73-year-old Thai billionaire Dhanin Chearavanont, plans to add 3,300 stores to its existing 6,700 in the next six years, Piyawat said. About 500 outlets will open each year, more than half outside Bangkok. Stores in provincial cities and rural areas will account for 60 percent of the company’s total, from about 50 percent, he said.

Charoen Pokphand Group and biggest competitor Tesco Plc (TSCO) are adding outlets in the nation of 67 million people after the government raised minimum wages and introduced price guarantees for rice and rubber to boost rural incomes. Piyawat said he also wants to expand outside of Southeast Asia’s second-biggest economy, and may open 7-Eleven stores in southern China and Vietnam to help meet the Bangkok-based company’s long-term profit target.

10 Comments You Never Want to Hear in a Startup

Is Ethnicity a Barrier to Growth in Asia?