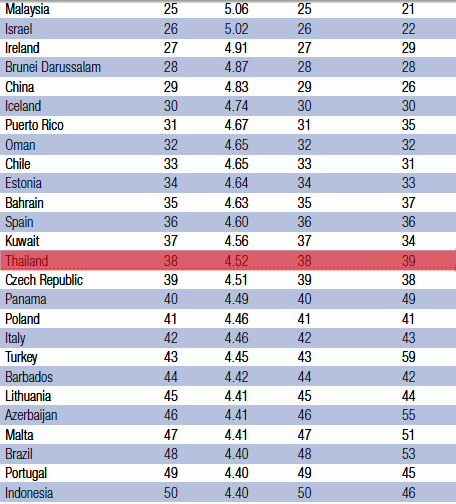 Thailand’s global competitiveness ranking has risen one place, to 38th, breaking a six-year streak of declines, according to the World Economic Forum WEF.

Switzerland was ranked as the world’s most competitive economy in the annual rankings, followed by Singapore and Finland. The WEF noted that despite the improvement in Thailand’s overall ranking, “the competitiveness challenges the country is facing remain considerable”

After having fallen for six years in a row, Thailand (38th) halts the negative trend and improves by one place in this year’s GCI

As in previous years, the Asia and Pacific remains among the fastest-growing regions worldwide,

and many of its economies have greatly improved their competitiveness over the past years.

The excellent performance of some of the regional champions is reflected in the presence of six economies—Singapore; Hong Kong SAR; Japan; Taiwan, China; the Republic of Korea; and Australia—within the top 20. However, significant and growing differences persist in terms of the competitiveness performance within the region, with countries such as Bangladesh (118th), Pakistan (124th), and Nepal (125th) lagging further and further behind.

After having fallen for six years in a row, Thailand (38th) halts the negative trend and improves by one place in this year’s GCI. Yet the competitiveness challenges the country is facing remain considerable. Political and policy instability, excessive red tape, pervasive corruption, security concerns, and uncertainty around property rights protection seriously undermine the quality of the institutional framework on which businesses rely heavily

Thailand’s ranking fell 10 places in terms of institutions to 77th, while public health at 71st and basic education standards at 89th were also considered weaknesses for the country’s competitiveness.

Technological adoption also fared poorly at 84th, with less than one quarter of the population using the internet regularly and only a small fraction with access to broadband.

On a more positive note, the macroeconomic environment continues to improve—albeit marginally (27th, up one spot)—as the budget deficit was reduced to less than 2 percent of GDP and the debt-to-GDP ratio dropped to 42 percent in 2011.

Accelerate Startup Growth by Looking Outside the Box

2017 saw Australia sign an agreement with Thailand in a bid to boost regional community security and they are now working in tandem with other Asian countries such as Singapore and China in a bid to tackle cybercrime within the Asia Pacific region. END_OF_DOCUMENT_TOKEN_TO_BE_REPLACED
Loading...
Continue Reading

The number of companies choosing Australia to establish an Asia-Pacific headquarters is on the rise. END_OF_DOCUMENT_TOKEN_TO_BE_REPLACED
Loading...
Continue Reading