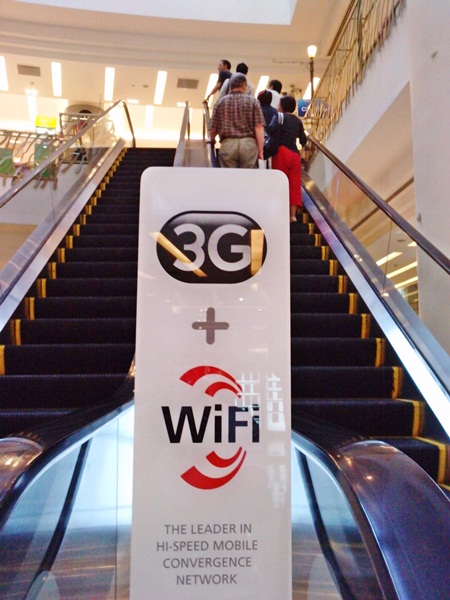 So the 3G nightmare is over right ? Not so fast…Do you really believe this ? Thailand 3G debacle has been the most laughable and ludicrous Thai soap  for several years. Believe it or not but Thailand is actually the only Asean country without a commercially available 3G offer. Even Laos has one.

Where this country is going , I m asking you. Please do not mess this up again in 2022 for the 4G auction…

3G give away: buy one get one free

Now suddenly it appears that not only the 3G auction is 10 years late (not to say retarded), but it looks like another “Thai Special Menu” with no competition, odd priced packaged and hand picked guests. Now the big surprise: the licenses were actually dirt cheap, and the state body could have scooped up almost 16 billion bath more for the whole shebang.

Yes you got  it right: the state and public companies had all the cards in hand and it took them 10 years to get ripped off by three rookies like AIS, TRUE, DTAC (not even a Thai company I was told). Where this country is going , I m asking you,  if good ol’ state cronies no longer run the game after 10 years of depriving the public of a technical progress essential to our Facebook and Twitter daily life. Please do not mess this up again in 2022 for the 4G auction…

Academics and politicians alike slammed telecom regulators Tuesday for essentially gifting new licences to the private sector at taxpayer expense. The sale fetched 41.625 billion baht overall, only 1.125 billion or 2.78% above the reserve price.

The three bidders, all representing units of mobile operators Advanced Info Service (AIS), Dtac and TrueMove, each won their maximum quota of 15MHz of spectrum in seven rounds of bidding that were completed in six hours. Only three of the nine slots auctioned attracted competition, with six slots, representing 5MHz each, selling at the minimum reserve price of 4.5 billion baht.

Expressing disappointment with the auction results, he said total bids were only 2.8 per cent higher than the starting prices set by the NBTC at Bt40.5 billion for nine separate licences.

The total bids were Bt41.65 billion and six licenses were auctioned at the floor price of Bt4.5 billion each.Though the people will have access to the 3G network from next year, the damages incurred by the state and taxpayers are estimated at Bt16.335 billion, Dr Somkiat said, adding that the three bid winners received ‘windfalls’ for the minimal differences between the auctioned and floor prices, excluding the discount of annual concession fee to be paid to the government at Bt40 billion.

Describing the bid prices as incredibly cheap, the TDRI president said each operator will have to pay only Bt1 billion a year while the fees for 3G service will not be lowered.

It will only boost the operators’ revenue, he said.The three winning operators were Advanced Wireless Network under Advanced Info Service, DTAC Network under Total Access Communication DTAC,and Real Future under True Corporation.He said the auction results confirmed the people’s belief that the NBTC acted in favour of the private operators, adding that the NBTC’s repeated propaganda about competitions among bidders was groundless.

Dr Somkiat said the equal allocations of frequencies to the private operators have deprived competition and that the NBTC has damaged the country by setting unrealistic floor prices.