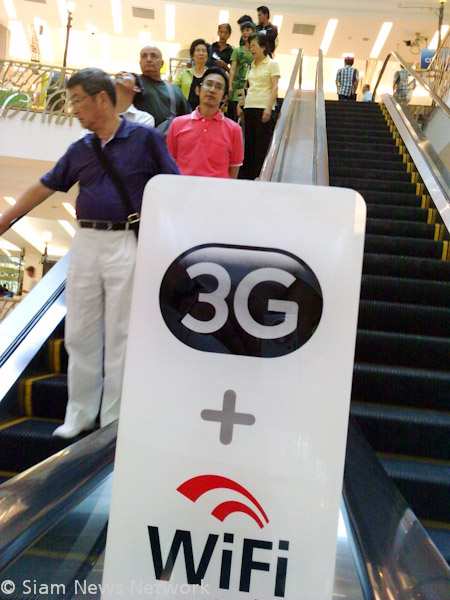 Thailand’s Administrative Court today refused to rule on a request to suspend the allocation of 3G licences by the National Broadcasting and Telecommunications Commission NBTC to three bid winners.

The Office of the Ombudsman earlier asked for the court’s decision not to issue the 3G licences to the bid winners, charging the NBTC with granting the licences without fair competition as stipulated by the constitution.

Believe it or not but Thailand is actually the only Asean country without a commercially available 3G offer. Even Laos has one.

The court said the Ombudsman was not authorised to file a petition on the case. In an auction on Oct 16, the NBTC awarded licences for mobile services on 3G spectrum to Thailand’s three largest mobile phone companies—Advanced Info Service AIS, Total Access Communications DTAC and True Move.

The bid results drew criticism and protests from different quarters of Thai society, including the Finance Ministry. The NBTC is obliged to issue licences to the bid winners within 90 days after approving the bid outcome. MCOT online news

via Thailand’s 3G services to move on after court’s ruling | MCOT.net.

So the 3G nightmare is over right ? Not so fast…Do you really believe this ? Thailand 3G debacle has been the most laughable and ludicrous Thai soap  for almost 10 years.

Believe it or not but Thailand is actually the only Asean country without a commercially available 3G offer. Even Laos has one.

3G give away: buy one get one free

Now suddenly it appears that not only the 3G auction is 10 years late (not to say retarded), but it looks like another “Thai Special Menu” with no competition, odd priced packaged and hand picked guests. Now the big surprise: the licenses were actually dirt cheap, and the state body could have scooped up almost 16 billion bath more for the whole shebang.

Yes you got  it right: the state and public companies had all the cards in hand and it took them 10 years to get ripped off by three rookies like AIS, TRUE, DTAC (not even a Thai company I was told). Where this country is going , I m asking you,  if good ol’ state cronies no longer run the game after 10 years of depriving the public of a technical progress essential to our Facebook and Twitter daily life. Please do not mess this up again in 2022 for the 4G auction…