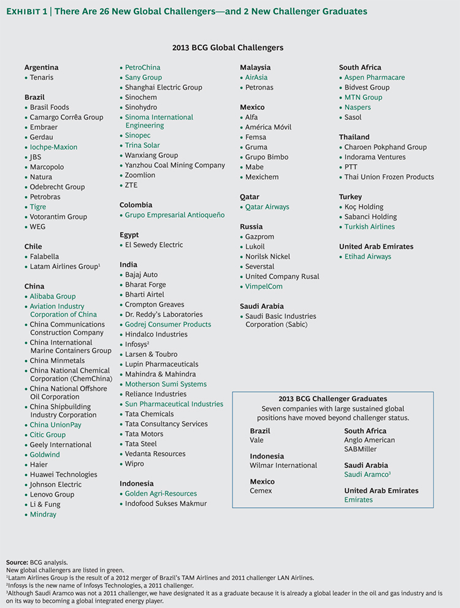 The 2013 BCG global challengers are 100 companies from rapidly developing economies (RDEs) that are both growing and globalizing quickly. Thailand has 4 challengers that are Charoen Pokphand Group, Indorama ventures, PTT,  and Thai Union Frozen Products.

They are hard at work transforming themselves into global champions. (For details on the selection criteria, see “Methodology for Selecting the BCG 2013 Global Challengers.”). This is the fifth time since 2006 that BCG has compiled a list of global challengers, and this group is the most diverse yet, with wider geographic and industrial breadth than ever before. (See Exhibit 1.)

The Challengers by Country

The 2013 BCG global challengers are from 17 countries, 7 more than in 2006.  As in previous years, China and India boast the highest numbers, with 30 and 20 global challengers, respectively. Thailand has 4 that are Charoen Pokphand Group, Indorama ventures, PTT,  and Thai Union Frozen Products

We began our analysis by compiling a list of potential global challengers from companies based in RDEs. As in the 2011 report, we focused on companies located in developing Asia, central and eastern Europe, the Commonwealth of Independent States, the Middle East, Latin America, and Africa.

Our initial master list of potential global challengers was drawn from local rankings of the top companies in the geographic markets listed above. As in previous years, we excluded joint ventures and companies with significant overseas equity holders but included state-owned companies that compete internationally. A few of the global challengers are headquartered in global financial or commercial centers, such as London or Amsterdam but their operations take place primarily in RDEs. We have listed these companies in the markets that house most of their operations.

Next, we applied a set of quantitative and qualitative criteria. Companies needed to have annual revenues of at least $1 billion, a threshold that ensures they have the resources to go global. We sought companies in which overseas revenues either totaled 10 percent of total revenue or $500 million. In export-oriented industries, such as mining, oil, and gas, we also required companies to possess overseas assets of at least 10 percent of total assets or $500 million. We made a few exceptions when we strongly believed that companies would meet these thresholds in the next two years. A final set of quantitative measures were related to growth and performance.

We sought companies with credible aspirations to build truly global footprints, excluding those that could pursue only export-driven models. Accordingly, we analyzed each company’s international presence, the number and size of its international investments, M&A activity over the past five years, and the strength of its business model. We also compared the size of each company with the size of other challengers and multinational competitors in its industry.

We based our final selection on these criteria and feedback from industry experts around the world.

Thailand to crack down on foreign business law violators