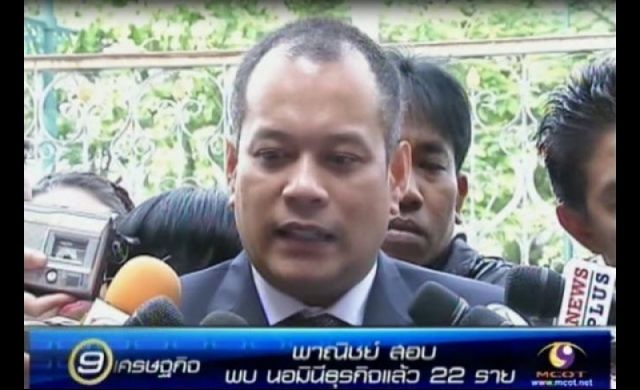 Thailand’s Ministry of Commerce has identified 22 violators of the Thai Foreign Business Act for holding more than half of the corporate shares when the law limits foreign ownership at a maximum 49 per cent.

Deputy Commerce Minister Nattawut Saikua said today that random checks by the Business Development Department found the 22 companies – 20 in Chonburi and two in Prachuap Khiri Khan – had breached the law by having Thai citizens holding shares in proxy for them.

The Foreign Business Act limits non-Thai ownership in a business operation in the kingdom at 49 per cent.

Mr Nattawut said the 53 Thais and foreigners in the 22 companies are in large- and small-sized real estate businesses, tourism, food and beverages, service and textile businesses.

Seventeen are Thai citizens and 36 others foreigners. Penalties for violating the Foreign Business Act are a maximum three-year jail term or fine between Bt100,000 and Bt1 million, or both.

Mr Nattawut said the inspections were to ensure fairness for Thai business operators, adding that foreign ownership of more than 50 per cent in a company is allowed as long as the investors inform the Commerce Ministry. (MCOT online news)

The Foreign Business Act was a law enacted by the Chuan Leekpai-controlled National Legislative Assembly of Thailand in 1999 that limited foreign ownership of certain Thai industries. Its predecessor was the Alien Business Act of 1972, enacted by a military junta. Industries which must be majority-owned by Thais included the newspaper business, radio stations, television stations, rice farming, animal husbandry, fishing, land trading, mining, wholesaling and retailing, restaurants, and all service businesses.

The law criminalized nominees, any Thai who held shares on behalf of a foreigner. Nominees could be fined 100,000 to 1 million baht and face up to 3 years in prison. However, the law did not prohibit foreigners from being the majority in the board of directors and also did not prohibit having different classes of shares with differing voting rights. This loophole allowed thousands of foreign-controlled businesses to operate in Thailand.

The Foreign Business Act of 1999 (“the Act”), which became effective on March 4, 2000, repealed and replaced the 1972 National Executive Council Announcement 281, better known as the Alien Business Law. The Act provides a definition of “alien” and identifies the scope of foreign participation in business in Thailand.
“Alien” is defined as:
• a natural person who is not of Thai nationality;
• a juristic entity that is not registered in Thailand;
• a juristic entity incorporated in Thailand with foreign ownership accounting for one-half
or more of the total number of shares and/or registered capital;
• a limited partnership or ordinary registered partnership whose managing partner or
manager is a foreigner.