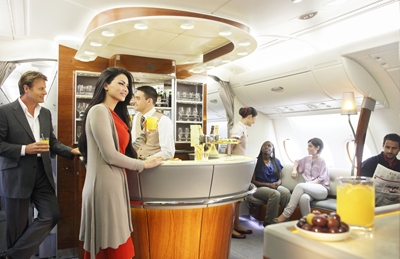 Airbus forecasts that the Asia-Pacific will dominate the world’s demand for aircraft within the next 20 years, with needs expected to skyrocket to 10,440 jets from today’s 4,300, thanks to growing air travel in the region.

John Leahy, Airbus’ Chief Operating Customer Officer, said in Singapore on Monday that being valued at US$1.6 trillion, the 10,440 jets represent 35 per cent of global deliveries expected over the next two decades and the aircraft value embodies 40 per cent of the global market. Among the number of predicted fleets, 3,800 would be wide-body and fuel-efficient aircrafts.

“The Asia-Pacific market is where the action will be in the air transport market over the next 20 years. Growing economies, bigger cities and increasing wealth will see more people flying, driving the need for larger and more efficient aircraft,” John said in a statement sent to The Jakarta Post on Tuesday.

According to him, air traffic in the region will rise by 5.8 per cent, while low-fare flights will see 7 per cent annual growth within the second decade.

The Asia-Pacific is among Airbus’ main markets, representing 31 per cent of the total demand it receives. There are currently 2,100 airbus operating under 97 airlines.