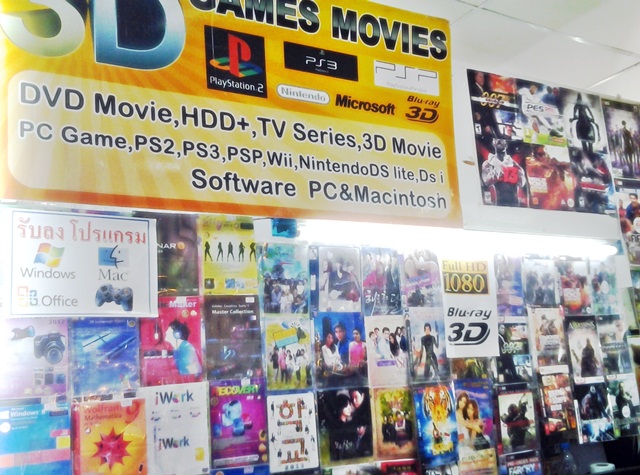 In spite of recent efforts to fight IP violations in the kingdom, Thailand will remain another year on the US Trade Representative priority watch list with nine other countries for the seventh consecutive year.

USTR has designated Ukraine as a Priority Foreign Country in this year’s report as a trading partner whose onerous or egregious acts, policies, or practices have the greatest adverse impact (actual or potential) on the relevant U.S. products. In addition, Ukraine is not entering into good faith negotiations or making significant progress in bilateral or multilateral negotiations.

In spite of recent efforts to fight IP violations in the kingdom, Thailand will remain another year on the US Trade Representative priority watch list’ with nine other countries for the seventh consecutive year.

Trading partners on the Priority Watch List present the most significant concerns regarding insufficient IPR protection or enforcement, or otherwise limited market access for persons relying on intellectual property protection.

Ten countries – Algeria, Argentina, Chile, China, India, Indonesia, Pakistan, Russia, Thailand, and Venezuela – are on the Priority Watch List. USTR will seek to engage intensively with these countries, as appropriate, during the coming year.

Among  Ip violations products available in Thailand, the USTR cited the so called “boxes” which are actually hard disk pre loaded with pirated movies. The emergence of Media Box piracy , whereby “boxes,” often with capability to play high definition content, are loaded with large quantities of pirated works .

These boxes may be sold with preloaded content, but can later have new content uploaded for a relatively low fee. Boxes may be purchased online, with the user’s chosen content, and delivered via postal service, or may have online capabilities allowing consumers to download infringing content from the Internet or through downloadable apps. This problem has been reported in China, Indonesia, Malaysia, Taiwan, Thailand, and Vietnam.

The United States is prepared to review that status if Thailand makes significant progress in passing key legislative initiatives mentioned below, and improves its overall enforcement efforts. The United States remains encouraged by Thailand’s commitment to improving IPR protection and enforcement. The United States is also encouraged by the passage of the Anti – Money Laundering Act, which includes IPR offenses as a predicate crime, and the launch of the National IPR Center of Enforcement , and it is hopeful that this center will lead to improved coordination and more effective enforcement actions among enforcement agencies. U.S. rights holders continue to report good cooperation with Thai enforcement authorities, including the Royal Thai Police and Royal Thai Customs.

The United States urges Thailand to complete many of the legislative initiatives begun in past years, including legislation to address landlord liability, to address unauthorized camcording of motion 43 pictures in theaters, to provide Thai Customs with ex officio authority, to fully implement the provisions of the WIPO Internet Treaties, and to establish improved legal mechanisms to address the rapidly growing problem of copyright piracy and trademark counterfeiting on the Internet.

“Year of the IP Protection”, did not convinced the USTR

Thailand is vowing to step up its war against intellectual property (IP) piracy, with the Yingluck Shinawatra administration designating 2013 the country’s “Year of IP Protection.” Similar to many developing countries, Thailand has faced difficult and sometimes complex challenges in protecting trademarks, copyrights and patents. But the government is determined to show greater resolve on this issue as it transitions the country towards an economy where creativity and knowledge are essential components and drivers of growth.

As part of the Year of IP Protection, the Thai Ministry of Commerce will work closely with the Royal Thai Police to suppress violations such as manufacturing, importing and trading of counterfeit goods, and the Education Ministry will increase awareness of IPR among Thai youth. While some trading partners, including the United States, have registered concerns over the level of piracy in Thailand, Thai innovators and businesses are also victims of IP theft and have been telling the authorities that they need to do more when it comes to enforcement.

To demonstrate a new level of commitment, beginning this holiday season the government has been sending teams to markets known as “hotspots” for pirated goods. Recently, an “out-of-cycle” report by the U.S. Trade Representative (USTR) named 12 areas around the country that it called “red zones” because of the high volume of pirated goods sold and found there. Some are popular with tourists as well as Thais, while others are patronized chiefly by locals.

According to Deputy Commerce Minister Nattawut Saikua, the 12 areas have already been designated as targets for more frequent and thorough sweeps and inspections by law enforcement officials. He added that he expects parliament will pass a law this year banning patrons from bringing camcorders into movie theaters, with stiff penalties for violators.