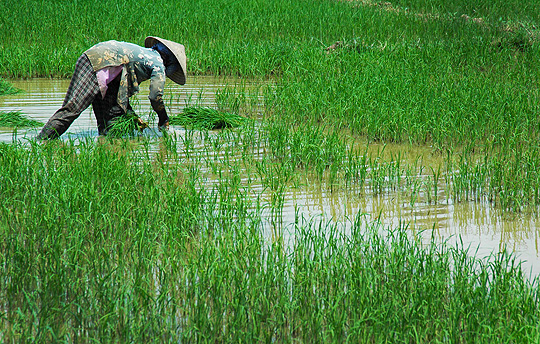 The government in Thailand is hailing a recent agreement with China as a significant step towards reducing its extensive rice stockpile. However, critics of the programme, which offers growers a minimum price for their crops, say that the deal with Beijing will put only a dent in Thailand’s so-called rice mountain.

One of the key pillars of Prime Minister Yingluck Shinawatra’s electoral platform when campaigning for the 2011 general election was price support for the millions of rice growers in the country. Under what became known as the “pledging scheme”, the state would guarantee farmers a set minimum price, should the market rate fall below a certain level. However, the floor set by the state was – and for the most part has remained – well above free market rates.

Among the objectives of the programme when first introduced in October 2011 was not only to raise income levels for local growers, but also to push up the price of Thai rice on international markets. While the first goal has been achieved, with more than 3.4m households benefitting from the scheme in the first round of pledging last season, the second has not, with prices static or even down from previous highs, resulting in an increasing stockpile in state warehouses.

Thailand’s cause has not been helped by global rice stocks rising to 12-year highs, making the market sluggish. Picture: adb.org

Figures vary as to how much rice is held in stock, with some private reports putting the figure at up to 17m tonnes, though state agencies say it is below 10m tonnes. This could shrink further when shipments for recent contracts begin. Since the scheme was introduced, the government has paid almost $19bn, buying unmilled rice direct from farmers at $473 per tonne, though the cost to the state climbs to some $700 per tonne when the expense of milling, transport and storage are taken into account.

Prior to the scheme’s being launched, Thailand sold 8m-10m tonnes to overseas buyers each year, though this fell to just under 7m tonnes in 2012 as high prices resulting from the pledging scheme meant the country lost out to rivals such as India and Vietnam. This could again be the case in 2013, with both competitors pricing their rice well below the rates quoted by Thailand. According to data from the Thai Rice Exporters Association, export volume was down 5.1% for the first seven months of the year, and by 5.6% in terms of earnings.

However, relief may be at hand through the government’s deal with China. Finalised on September 12, the agreement will see China buy 1.2m tonnes of Thai rice over the next 12 months. When announcing the sale, Commerce Minister Niwatthamrong Bunsongphaisan did not give details of the price to be paid for the grain, though he did say the sale would help reduce stockpiles significantly. At current rates, the sale to China could be worth more than $500m, but it is possible that the government has sold at below market value, in part to clear its storage sites in readiness for the beginning of the October wet season harvest.