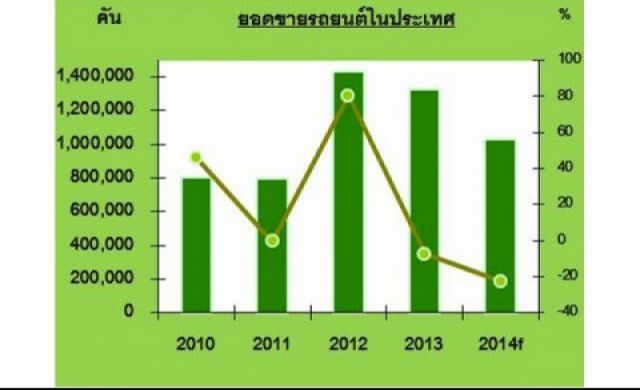 Thailand’s auto market will shrink 20-25 per cent this year to a total sales volume of only 1-1.06 million units, according to Kasikorn Research Centre (KRC).

KRC said negative factors contributing to the fall include the termination of tax incentives for first-car buyers and political unrest during the first half of the year.

It predicted 2014 as another unfavourable year for the local auto industry after sales dropped in 2011 when Thailand was severely hit by major flooding.

This year’s auto manufacturing will drop to 2.2-2.3 million units, or by 6-10 per cent, compared to last year which saw a total production of 2.45 million units.

Thailand’s ninth rank among world auto producers in 2014 will possibly slide down this year.

KRC said this year’s auto manufacturing decline will be short-lived while positive factors –especially free trade under the ASEAN Economic Community framework and the development of the second generation of eco cars– will stimulate the auto industry.

The Thai Automotive Institute is confident to retain Thailand being the leader of car assembly in ASEAN despite the recent drop in production numbers.

Newly appointed director of the Thai Automotive Institute Vichai Jiratiyuth, stated that he is confident that Thailand will be able to maintain its position as ASEAN’s leader of automobile assembly despite close competition from Indonesia which has stepped up its production.

He did however admit that the recent political stalemate has resulted in 5%-10% decrease of assemblies which is now down to 2.35 million vehicles.

Despite the drop, the Ministry of Industry has announced its intention to increase national production to 3 million vehicles by 2017 which will elevate Thailand to the eight largest automotive assembler in the world; one notch up from its current ninth position.