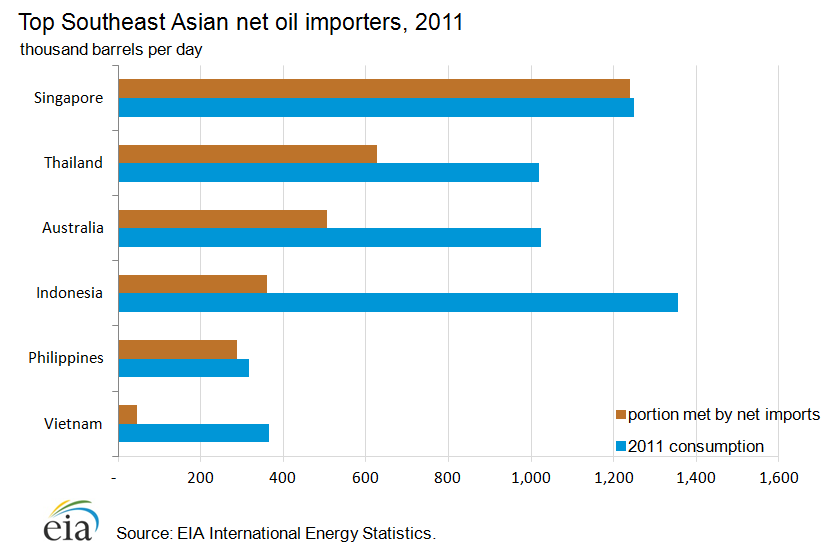 Thailand has limited domestic oil production and reserves, and imports make up a significant portion of the country’s oil consumption. Thailand holds large proven reserves of natural gas, and natural gas production has increased substantially over the last few years.

However, the country still remains dependent on imports of natural gas to meet growing domestic demand for the fuel.

In September 2006, a military coup overthrew the government of Prime Minister Thaksin Shinawatra. The change in leadership and subsequent protests have had little impact on oil or natural gas production.

Thailand’s real gross domestic product (GDP) grew only 0.1 percent year over year in 2011, down from a high growth of 7.8 percent in 2010 due to the global economic recession and extensive flooding during the latter half of 2011.

The Thai government forecasts its economy to grow by 5.5 percent in 2012 in anticipation of post-flood reconstruction and higher domestic demand. In turn, oil and gas production and consumption are expected to increase slightly in 2012 and 2013, and industry sources estimate that the first half of 2012 shows a recovery in both oil and gas supply and demand from 2011 levels.

Solid biomass and waste account for 16% of energy consumption

As the economy expanded and industrialized, Thailand consumed more oil for transportation and industrial uses. Natural gas has replaced some oil demand and is the next largest fuel, growing to nearly a third of total consumption mix. Solid biomass and waste have played a strong role as an energy source in Thailand and comprise roughly 16 percent of energy consumption.

Most biomass feedstock is from sugarcane, rice husk, bagasse, wood waste, and oil palm residue and is used in residential and manufacturing sectors. Thailand has promoted biomass for heat and electricity, though growth has been very gradual due to industry inefficiencies and environmental concerns. Thailand’s new Alternative Energy Development Plan calls for renewable energy to increase its share to 25 percent of total energy consumption by 2022 in efforts to reduce dependence on fossil fuels. However, this is an ambitious target requiring significant resource development and subsidies.

As Thailand continues to expand economically, it will place greater emphasis on energy supply security by diversifying its fuel slate and promoting upstream development of hydrocarbons including alternatives to conventional fuels.