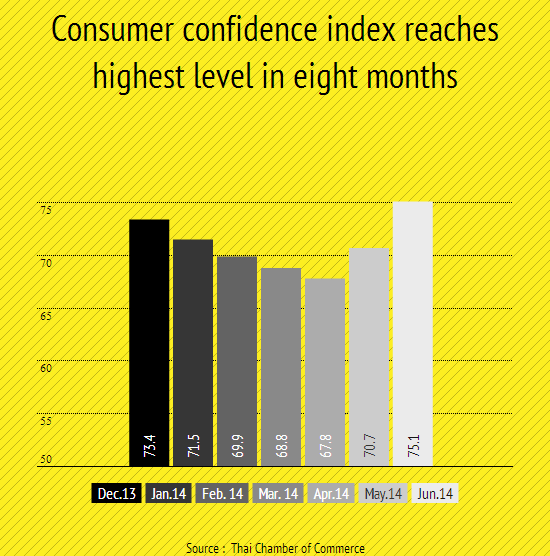 Thailand’s Consumer confidence index in June increased to the highest level in eight months at 75.1, according to the Centre for Economics and Business Forecasting of the Thai Chamber of Commerce.
The centre director Thanawat Pholvichai said the 75.1 index recorded in June was the highest since November 2013.

Consumers consumption is also expected to steadily grow in the second half of this year, he said citing the World Cup 2014 as a stimulant to increased spending, as well as rice payments for farmers’ pledged rice should also increase nationwide purchasing power.

Consumer confidence index in June increased to the highest level in eight months at 75.1, the Centre for Economics and Business Forecasting of the Thai Chamber of Commerce

Thanawat said consumption would be an important force that would drive the Thai economy in the second half of this year and that would enable consumer confidence to grow gradually.

Thai automobile industry likely to pick up in 2014

Piengjai Kaewsuwan, president of the Thai Automobile Industry Association and chairwoman of the Asean Automotive Federation, said the Thai automotive industry would enjoy a major recovery this year as the National Council for Peace and Order (NCPO) relieved local political situations and paid for farmers’ pledged rice.
Ms Piengjai said that as farmers now have money, the sales of motorcycles and pickup trucks used in agriculture were increasing.

She expected local automobile sales at 1 million units this year, less than an earlier projection of 1.2 million.

Thailand remains as the biggest automobile producer in Southeast Asia by building 2.4-2.5 million vehicles annually, she said. The automotive market in the region will continue to grow in for the next one or two years.

Investment in the automotive sector of the region is rising. This does not mean that automotive producers are leaving Thailand for nearby countries as investment is also growing in Thailand.

This includes Nissan that is raising its production capacity to 100,000 units per year and Toyota that has invested Bt50 billion in similar expansion.

Expats get more for they dollars in Bangkok