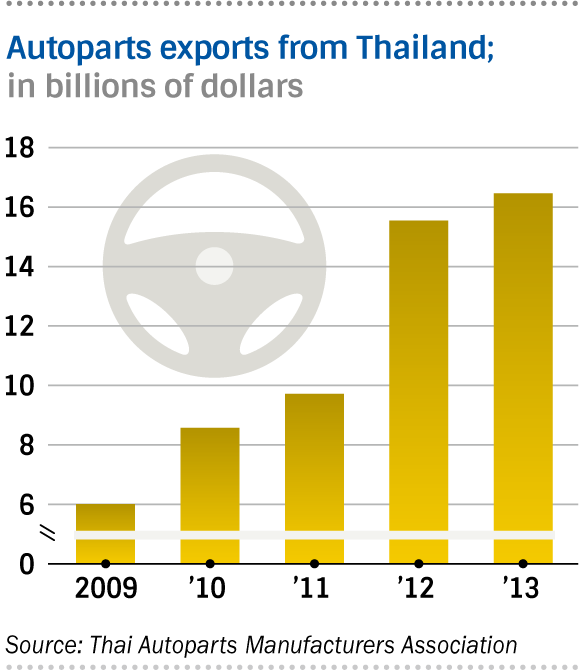 Thailand’s automotive companies, increasingly on the cutting edge of component technology, have turned their country into “Southeast Asia’s Detroit.”

That would be last century’s Detroit. These days, the home to General Motors, Ford and Chrysler continues to struggle with debt, decay and crime. In Thailand, a new generation of engineers is taking up jobs that once went to the city known as Motown.     Thai Summit Autoparts Industry, the country’s largest autoparts maker, recently released a new line of autoparts that are 70% stronger than their predecessors.

Around 2,500 domestic and international autoparts companies operate in Thailand

Other Thai manufacturers are landing orders for increasingly sophisticated components and products.     Just outside Bangkok, Summit’s main factory pumps out products that once could only have been made in Japan. A press bends steel with a force of 600 tons, turning out long, 80cm wide sheet. Car frames will later be made with the 1mm thick sheet, which is about 40% thinner than conventional auto steel.

Around 2,500 domestic and international autoparts companies operate in Thailand. “Tier One” companies that have direct dealings with non-Thai automakers account for only 20% of those operating in the country. If competition to reach the top tier intensifies, the Thai auto industry should become even stronger.

“Product quality and manufacturing techniques can be improved plenty,” said Yasuhiro Shido, executive vice president of Toyota Motor Asia Pacific Engineering & Manufacturing. He points out that sometimes there is a divergence between end products and blueprints.

via Thailand takes over from Detroit- Nikkei Asian Review.