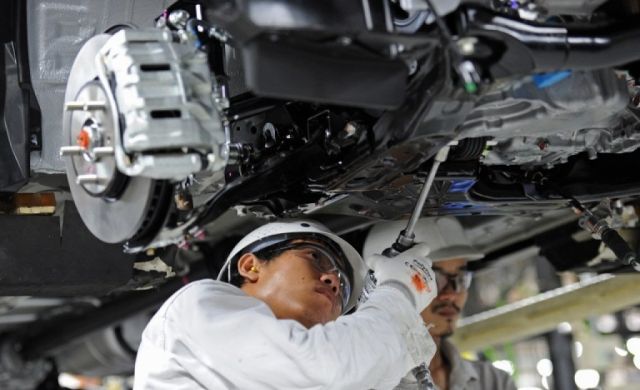 Car production in Thailand in 2015 is projected at 2.2 million units, while export is set for 1.2 million units, said Surapong Paisitpattanapong, vice chairman of the Federation of Thai Industries.

Mr Surapong, who is also FTI’s automotive industry group head, said the auto industry in Thailand has set the car production target for 2015 at 2.2 million units.  Sales in the country could increase to one million units this year, depending on government disbursement and investment in mega projects as well as on government financial assistance to agriculturists. Exports of car in 2015 are projected at 1.2 million units, almost equal to last year which stood at about 1.13 million units, he said.

Vice President and Spokesman of the FTI’s auto industry group Suraphong Phaisitphatthanaphong said the number of cars manufactured in Thailand last year stood at 1.88 million units, decreasing from the same period of 2013 by 23.49% and the target of 2.1 million units.

A 33.7% drop in car sales in the country was the main cause of the lower production in 2014. Other factors affecting Thailand’s car production last year included an economic slowdown, delayed budget disbursement of the government and produce price drop, said the vice president.

There are approximately 2,400 automotive suppliers in the country, about 709 of which are original equipment manufacturers (OEMs). Major foreign parts and components manufacturers in Thailand are such as France’s Valeo, Germany’s Bosch, US-based TRW, Britain’s GKN and Japan’s Denso, Mitsuba and Mitsubishi Electric.

According to the Japan Automobile Manufacturers Association, Thailand-made automotive parts have the highest quality among the ASEAN countries. Local manufacturers supply about 85% of the partsused in pickup truck assembly, and about 70% of those for passenger cars assembled in Thailand.Moreover, the country produces nearly 100% of the parts used in the assembly of motorcycles.