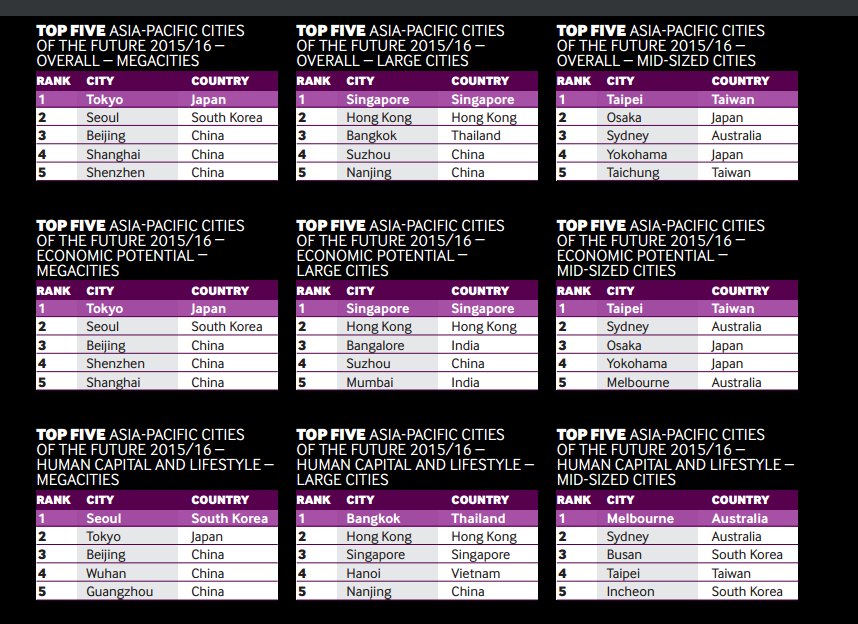 Singapore has triumphed in this year’s ranking of cities across the Asia-Pacific region, with Tokyo rising through the ranks to take second place and Taipei following in third position.

Traditionally a strong performer in FDI, Singapore has ranked first of all Asian cities in fDi’s Asia-Pacific Cities of the Future 2015/16 ranking, for the third time in a row.

Singapore attracted 7.3% of all inward investment in the Asia-Pacific region between 2003 and September 2015.

The city performed well in many of this year’s categories as overall winner of megacities, topping Economic Potential for megacities and coming in first place in the Connectivity category for all sizes.

In total, 96 investments were made according to crossborder investment monitor fDi Markets, with projects coming from some major global investors.

DHL Express, a subsidiary company of Germany-based logistics company Deutsche Post, invested €67m to relocate and expand a new gateway in Tokyo, which is due to come online in the first quarter of 2016.

The company credited the investment decision to the country’s “remarkable economic recovery”, which will provide it with opportunities for further growth.

The majority of investments into in the city came from US-based companies, with 474 US projects recorded between 2003 and September 2015.

Software and IT services attracted the highest number of projects in Tokyo by sector, accounting for 32%, followed by business services (13%) and financial services (12%).

Tokyo’s IT strengthWith a culture of high technology, Tokyo lends itself to IT investment – US-based internet company Cisco Systems established an innovation lab in the Japanese capital in 2014, chalking its investment decision up to the country’s history of innovation and Japan’s position as a global leader in technology.

In total, 90.58% of the Japanese population are online, the highest of any country analysed. Japan performed well in the Networked Readiness Index from the World Economic Forum and Tokyo enjoys very high upload and download speeds, helping the city rank first in the Connectivity category.

Tokyo is easily accessible with two international airports and six ports in its environs.

Taiwan’s capital, Taipei, increased from sixth position in the 2013/14 ranking, to finish third in 2015/16, topping the ranking of mid-sized Asia-Pacific cities, as well as the Business Friendliness and Economic Potential categories of mid-sized city rankings.

Taipei has a healthy economy, with a GDP per capita of 44,173 international dollars.

The city is a hotbed for innovation, with 24,280 patents recorded between 2010 and 2014, the third highest of all cities in the study.

We plan to continue to develop Tokyo as a global financial centre to support even greater economic growth beyond the Tokyo 2020 Games – Yoichi Masuzoe, governor of Tokyo

Hong Kong’s Innovation and Technology Fund has been in place since 1999, and has funded more than 4600 projects in R&D. The investment promotion agency actively encourages start-ups with the StartmeupHK initiative, a platform that shares resources with local and overseas start-up communities abroad.

Does Thailand Really Need to Join the TPP?