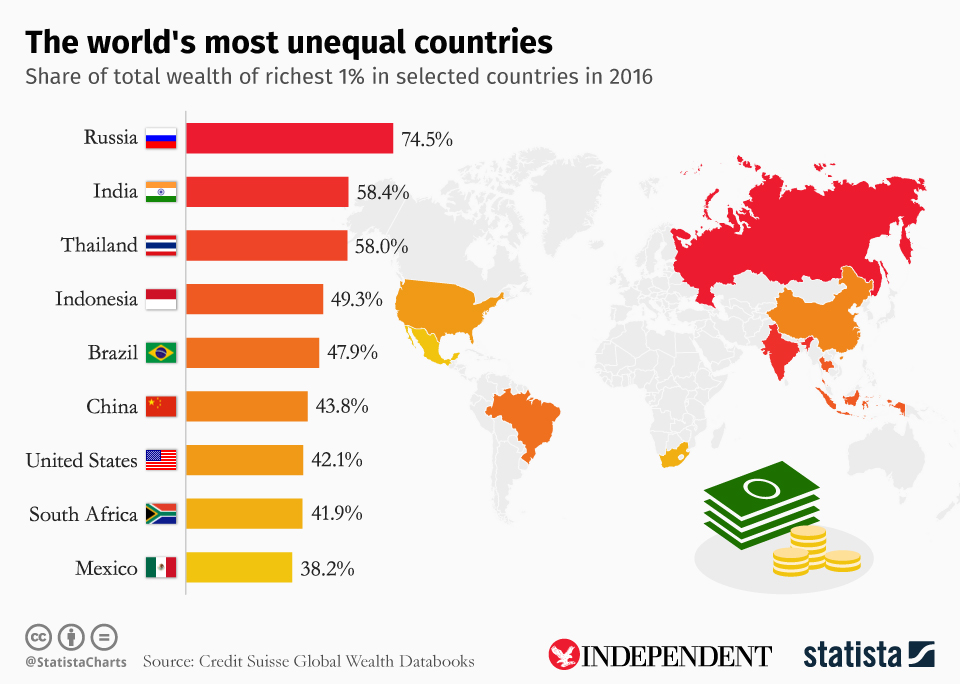 Credit Suisse’s Global Wealth Report 2016 identified Russia as the world’s most unequal country, with a staggering 74.5 per cent of the nation’s wealth controlled by the richest 1 per cent of people.

In India and Thailand, the top 1 per cent own nearly 60 per cent of the wealth, while the figure was around 50 per cent for Indonesia and Brazil.

Credit Suisse said the world had been growing more equal from the start of the century until 2008.

“The trend reversed after the financial crisis”, its report notes however, and while the most recent data is only provisional it looks set to continue to get more unequal.

Private wealth in the Asia-Pacific region surpassed that of North America for the first time last year, fueled by stronger economies and real estate markets, according to a Cap Gemini SA report.

Where do the bottom billion live?

With both large populations and a high incidence of low wealth, Africa and India – as expected – account for a high proportion of the bottom tail. As Table 4.2 shows, 486 million members of the bottom quintile – almost exactly half of the bottom billion – live in Africa or India, and 1.1 billion adults there fall within the bottom half of the global wealth distribution.

The other major concentration is in the Asia-Pacific region, particularly the low-income countries of South Asia and South East Asia.

Together, Africa, India, and Asia-Pacific account for 72% of the bottom billion by wealth, and 70% of the bottom half. The remaining 30% are mainly spread across China, Europe, and Latin America.